Choose one. I dare you.

VOICE OVER GIG
or
CON APPEARANCE

D.C. Douglas is a voiceover announcer and character actor based in Los Angeles, California. The following information is to help fans and potential clients find D.C. Douglas easier.

Wow. That last sentence was so official. Okay, here we go: while this website is intended for both sides of my career, I am adding mainly VO related information on this home page so that potential clients who have never heard of me can find this site, fall in love with my voice and hire me. That way i can still be an on-camera actor in really low budget indie films that feed my inner artistic beast - like the kind of films you can see on the "Film & Television" side of my website right this very moment... If only you would stop reading this and scroll the hell up the page!

Now some background information on me. Not to be egotistical (just more to be helpful to search engines) I have been compared to the Allstate voice and, in general, known for a big booming voice, GEICO guy, Guy from the movie trailers, Voice Over Man, my voiceover guy and more. To be clear, I am nowhere near as famous as The Movie Trailer Guy (a la Don LaFontaine) aka Voice of God, The Voice of Movie Trailers. Nor the likes of Will Lyman, Vin Scully, Harry Caray, Michael Buffer, Mel Blanc, Johnny Olson, Johnny Gilbert, Curt Gowdy, John Facenda, Don Pardo, Orson Welles, Will Arnett and so many more that I am not worthy of...

How I Fell Into The Voiceover Business

I didn't start out wanting to be the "In a world..." voice. Far from it. I knew at the age of seven that I wanted to be a film and television actor after watching a "Hollywood and The Stars" special, narrated by Joseph Cotton. After that moment all I focused on was becoming an actor. I studied at local theatre companies (Like the Contra Costa County Civic Arts Repertory and CMTSJ - Children's Musical Theater of San Jose), took acting classes, and eventually made my way down to Los Angeles at age 19. One of the first acting schools/coaches I auditioned for was a lovely lady named Barbara Gill. The full story involves me not realizing what VO was nor what she did and just performing my monologue to her utter delight and confusion. Anyway, she said I had an amazing voice and should seriously consider voiceover as a second career. That was the beginning of it. (Side note: I eventually ended up studying at Estelle Harman's Actor's Workshop (Eden Bernardy.) A few years went by and I ended up signing with a non-union talent agency called L'Image Talent in Studio City. They sent me out on cheesy on-camera commercials.

Then one day they sent me on a voice over audition. It was for a 1-900 line. They were popular and lucrative then. I booked it! From there, I began getting more of these one-off voiceover jobs. Then it faded away. Several years later I took a class with Louise Chamis (whose specialty was cartoon voices for animation). She was very pro-active and insightful. She hooked me up with a loop group (also known as walla and ADR). Then I started doing many walla sessions for cheesy films! (See a pattern here?) Then, one day, another audition through the lady who ran the loop group - It was for the voice of an A.T. and T. ride at Epcot Center in Florida. I landed the gig. (And for years told kids to keep their hands and feet inside the ride.)
ADDITIONAL INFORMATION
From there I stumbled upon King Productions. I went there to get my acting demo reel edited. They were using a new kind of process called non-linear editing with Avid. After watching the editor for 10 hours I realized I could do it better! I worked for a rich guy in Malibu at the time (Lloyd Eric Cotsen) and convinced him it could be a good side business. He bought the equipment and Planet Video was born. Meanwhile, that editor at King Productions knew that I did voiceover. So every now and then they would call me in to voice some movie trailer or promo. But even that faded with time. Through that same walla / ADR group I hooked up with Oak Tree productions (Andrew McCarthy) and began doing their trailers. I even did a few Asylum trailers early on after acting in one of David Latt and David Rimawi's first ever Asylum productions.

Then the strike in the early century happened. I was financial core (ficore) so I decided now was my time to break into the world proper. I ended up auditioning for Elaine Craig, Kalmenson and Kalmenson, Carroll Casting and The Voicecaster. Once the strike was over, I had a much better voiceover demo reel and contacts / referrals. So I went off to land an agent. Enter Abrams Rubaloff and Lawrence. More specifically, Mark Quinn. I will forever credit my union voiceover career to him. When he moved over to Abrams Artists and Associates, I moved with him. I landed my daytime CBS promo gig through him. And even my GEICO gig was through him, though he left the agency before it turned into the hugely lucrative gig.

I credit GEICO and Apple stock (iPhone announcement) with helping me buy my first house. Hee hee! (Sorry, some self-congratulations is healthy.)

As you can see, it was a long, long journey to here. And there is no right way to get here. Everyone has to find their own path and kick their own butts to do it.

So, as for how people cast me or hire me for their voiceover projects, it goes both through my sag-aftra agent and also through this website. My home recording studio has an AKG 414C, mixer, presonus amp, imac and protools. Probably overkill in this digital age, but I've been doing it this way since 2002 and it works well for me. (Did I mention it was the CBS promo job that funded my studio? Did I also mention I quit my editing job and went solo without knowing if I could make enough money for rent? Well, I did. And I'm still amazed I make enough every month as an actor. But I have now for over a decade...)

I have to say, though, working on Transformers: Rescue Bots with Peter Cullen, Steve Blum, Mark Hamill, Maurice LaMarche, Jason Marsden, Lacey Chabert, Jeff Bennett, LaVar Burton, Tim Curry and Ginny McSwain has been the most educational experience of my life. And recurring on Cartoon Networks Regular Show has only broadened my mind with animation and cartoons.


Did you really just read all of that? You're insane. Stop. Forget everything you just read. Scroll back up and click on one of the damn buttons! Enjoy the videos. Read the blog. Then share my website link with all whom you love. Big hug. 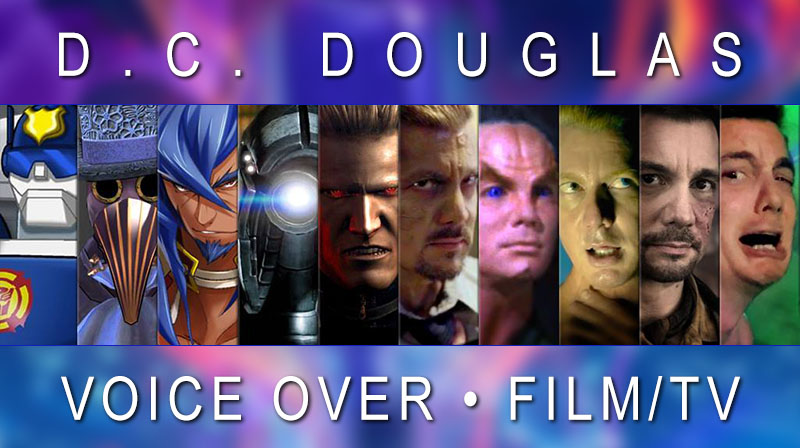