“You’ve got an amazing voice!” is not something I usually hear when I’m on a voiceover job.  Probably because the engineers hear amazing voices all day long.  It would be akin to seeing a show at Radio City Music Hall and singling out one rockette for having long legs.  Or going to the capital and telling a US Congressman they’re good at being bought.  Or hanging out in a brothel and … well, you get the picture.

But in my “civilian” life, it is something I hear a lot.  And, yes, I take it as a compliment.  Just like when I had a survival job as an editor.  I often heard “You’re an amazing editor.”  Nice, yes, but also a reminder that I was good at my survival job.

Don’t get me wrong – I LOVE my voiceover career!  But it has always been my “support career” for my first love: on-camera/stage/screen acting.  Usually when I hear “you’ve got an amazing voice” at an on-camera audition it means I’m not getting the role.

Sometimes it gets downright silly.  While auditioning for the role of a “CNN” type anchor, the casting director asked if I could take some of the resonance out of my voice!  As I was leaving he scrunched his face up and, with a complete lack of self-awareness, remarked, “your voice is so rich and deep…” — as though it was a problem for a “news anchor” role!

“Yep, ” I replied with a dash of sarcasm, “it’s what they call a ‘Broadcasters’ voice…”

This long preamble is to explain that, while I absolutely love my “bread ‘n butter” voiceover career, it can sometimes get in the way of my first, true love of on-camera acting.

Until last week…  While rehearsing my scene for CBS’s 2 Broke Girls, Kat Dennings remarked, “You have such an amazing voice!” Then others chimed in.  No problem, I already had the gig.  So I ran down some of my VO “hits” and then we continued rehearsing.

One of the things I love about working on a sitcom is the never-ending refining of the script up to and through the actual taping.  The next day the script had been rewritten to include a reference to my character’s voice. Yes, I had broken the curse!  Finally, my voice was not just an asset, but a laugh line!  I’d tell you more, but you’ll have to tune-in to the episode…

As for the rest of my 2 Broke Girls experience, it was a continuation of my “time-folding” theme from last week’s blog post about Hot in Cleveland!  The director was Ted Wass, who you may remember from Blossom, but I remember with great fondness as Danny Dallas from SOAP!

I ran into Jack Herman, the Extras Coordinator for the show, a very warm and funny guy who had auditioned me for a comedy show back in the late 80’s called On Thin Ice.  I was cast as an understudy and rehearsed once with the cast (which included a very young Hank Azaria) before the show disbanded. 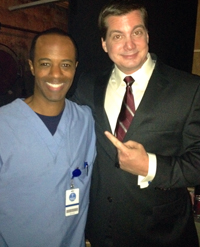 One of the guest roles was played by Groundlings teacher, Jordan Black, a name that was so damn familiar to me.  I knew him from his Comedy Central appearances and as a writer for SNL a few years back.  But during the speed-read before the audience taping we realized that 21 years ago we were in an improv group together for a summer! It was an odd feeling to talk this out in the make-up room in front of the two stars of the show, who were probably 6 years old in 1991.  Okay, so not an odd feeling, really, more a “Jesus Christ, I’m getting old” feeling.

The cast of 2 Broke Girls, by the way, were great!  Kat Dennings and Beth Behrs were easy-going and very funny (especially when Beth would get the giggles and pass it on to Kat).  Jonathan Kite and Matthew Moy went out of their way to make the guest cast feel at home.  Garrett Morris was just cool as always. And the executive producer, Michael Patrick King (of Sex & The City fame), was warm, classy and supportive.

My scene was with Kat and Beth, as well as with the main guest star, Josh Pais.  Josh is the kind of actor you meet and immediately realize he’s been in everything you’ve ever seen whether or not it’s true — he just has that kind of face.  (However, Josh really has been in a A LOT of things.) But meeting him was a special treat for me because he was in one of my all-time favorite films, Synechdoche, New York by the great Charlie Kaufman.  Josh played the ophthalmologist who informs Philip Seymour Hoffman that he’s going blind. 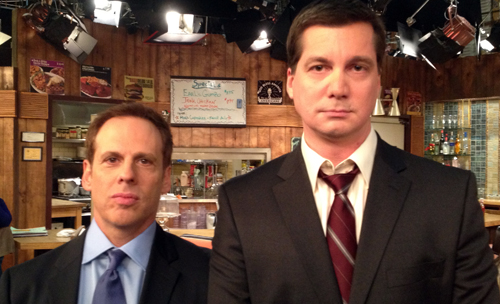 Josh Pais and I posing for the poster of our new series, “Bottom Feeders”

Watching Josh harness sitcom laughs with the subtlest of inflection and expression was a pleasure, as was his off-camera persona.  Of course, that all changed after he complimented my voice and I had to punch him in the face.

(Sorry, I just really wanted to bookend this post.)