I love 2012 in such a way that it makes previous years jealous and 2013 fear for it’s chastity. Big credit goes to my new agent, Dave Secor at the Daniel Hoff Agency (don’t worry, Dave, I know it’s inappropriate to french-kiss my agent).

In the last three weeks my episodes of “Bucket & Skinner’s Epic Adventures” and “Hot In Cleveland” aired. I worked on Comedy Central’s “Workaholics” and guest starred for a week on “NCIS: los Angeles.” I also landed a personal appearance agent, taboot. I would’ve cured cancer, but I need my beauty sleep.

This was one of the first gigs I landed through my new agent. It was part of our plan to resuscitate a sad resume that had been ODing on stale, dusty credits for the last 5 years. [Read about the shoot.] Didn’t realize that within 12 months I’d land 8 jobs! (Nine if you can’t the first NCIS gig I lost due to schedule changes while in Tahiti…  Yes, I know, boo hoo.)

Then “Hot in Cleveland” aired, allowing me to relive the giddy-filled days of shooting it! [Read about the shoot.]

This was a fun gig!  The role I auditioned for was part of a pair of roles where the first one had two “dialogue” scenes and the other had one.  A comedic character that I felt pretty confident about playing when going in… Until I saw J.P. Manoux.  (Damn you, Manoux!) J.P. is hysterical, talented and has such a distinctive look.  I pretty much knew he was going to book it.  And he did, but I was cast as his partner, which made me 90% as happy.

The roles are quite fun and will most likely not win any GLAAD awards.  Probably because of my electric banana pants:

On the day of the table read I realized I was working on my second project with the wonderful Linda Hunt, though really only in her “proximity” this time  (Linda narrates my latest and greatest film short, The Crooked Eye – see it on iTunes!).  After the read thru, I caught up with her outside the soundstage and said hello.  She was so sweet as to remark that she had seen our film short and thought it turned out wonderfully.  Made my whole day!

The best part of the shoot, though, were the guns.  Oh, the guns!  The minute they handed them to me the 13 year old inside took over.  Finely tuned “acting” gave way to thrilling “make believe” time.  The exhilaration of shooting a mini Uzi is akin to a roller-coaster rush without the puking.  Mind you, I abhor guns!  I’m a dove, man.  But the 13 year old still likes to feel bad-ass.  (Angst over late-arriving pubic hair, maybe?) 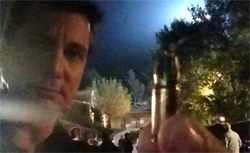 Our night shoot consisted of J.P. and I running up a long driveway and hiding behind two brick pillars as we dodged bullets.  The production company’s permit only allowed for gunfire until midnight and it was 11:50, so blocking was quickly given in the abstract to save time. Not a prob for us since we both had worked on indie films before and knew how to roll with chaos.  (That last sentence fueled by Uzi Memories™)

They handed us our “hot” guns and we got into position.

J.P. turned into “lightening ninja” as he darted up the street blasting away.  My 13 year old was NOT going to be outdone, so I kicked into high gear, hurling my 6’2″, 200 lb body up the driveway… Only to realize I was going to have to be “method” in stopping this human freight train.  I was gonna have to slam my body up against the brick pillar – like stunt guys do in the action movies.  But it’s for my art…

This is how I learned that the art department was excellent at making faux brick pillars.  Down it went, at 11:55!  A mad shuffle filled with crew laughter ensued as we quickly reset to go one last time.  The 1st AD (a fun and funny “12 Monkeys” Brad Pitt look-alike Eric A. Pot) remarked, “Probably should’ve mentioned it was fake…”

I was later informed that I would definitely be making their season’s gag reel… I’ll take my accomplishments where ever I can get them.

An added treat was running into Jack Herman on set, again.  I had just seen him on the “2 Broke Girls” set last month [read about the shoot].  Jack works on the production side of things these days, but I met him over 20 years ago when he performed on stage with another long-time friend, Doug Stone, and a young newbie in town, Hank Azaria.  Jack has such a lovely warmth about him, hundreds of fun industry stories and the voice of Alan Alda/Howard Stern.  In fact, if you ever need a sound alike – Jack’s your man!  Seriously.

The Friday before I started working on NCIS, I auditioned for a small, but fun role on Comedy Central’s ‘Workaholics.”  I had never heard of the show, so I DVRed a few episodes.  If you are under 30 and male, you must watch this show.  For those who appreciate improv chemistry, you must also watch this show.

So, while working on one show, I got the call that I was working the following week on another show!  This, dear people, is the “dream” portion of being an actor.  It’s how the 19 year old pictured every year of his career would be like.  In actuality, it is a rare occurrence, reserved for those 15 actors who aren’t famous, but you see in every show.

No time for post-NCIS-partem depression!  Went from “fabulous terrorist” role one week to “tattoo artist” role the next.

“Workaholics” comes from the brain trust of Blake Anderson, Adam DeVine and Anders Holm.  They started in the improv group Mail Order Comedy in the mid aughts, and now have a damn TV show!  They’re young, talented and attractive.  I hated them every minute I was on set… When I wasn’t totally enjoying their comic riffing on camera.  And their unpretentious demeanor off-camera… And their warmth in welcoming me onto their show.  Fine.  They’re okay, I guess.

My episode, directed by the classy Tristram Shapeero (and Tom Wilson look-alike) should be around the beginning of June and guest stars Rumer Willis, the daughter of Bruce Willis and Demi Moore, who has grown into a beautiful young lady.

Yeah, not quite.  I thought I might go for 3 gigs in a row when my agent called me with an audition for “Rizzoli & Isles,” but I was mistaken.  I work too much.

Turns out that my episode of “Franklin & Bash” airs the same night as this show’s episode does – both are on TNT this summer.  So, casting called back and nixed the audition.  That was a first for my career.  I was bummed (as it was a very funny scene) and flattered (because, damn, I’m on TV too much)!

And kinda spooky —  They keep track of these things?

Meet Me In Person!

During all of this career yumminess I landed a personal appearance agent.  Don’t worry, I have no delusions of grandeur about my film/tv career, contrary to the impression this DC branded career-whoring blog might give.  It’s for all the sci-fi, anime and videogame conventions out there, where the fans are hyper-focused on the details and unsung heroes.  Seriously, the best kind of fans.

Emily Danyel of TriBooking Management now reps me for all personal appearances.  Within three days of starting with her, I was booked for the Florida SuperCon (FSC) June 29th – July 2nd!  Since then, a few more have begun negotiations.  I hope to meet all the “Resident Evil,” “Mass Effect,” and “Transformers” fans around the world before I, or my career, dies – whichever comes first!  (FYI, Austrailia, France, Brazil, and Japan are high on my wish list… yeah, I’m still shameless.)

It seems a bloated blog post like this deserves a wind-bag wrap-up where I recount a long, detailed anecdote that puts it all in perspective…  Ain’t gonna happen.  I just had to put all these random things together because one long-ass blog post is easier for ADD Boy to handle than five separate, concise ones.

But I will give a thankful shout out to the folks who made me so hot for 2012… A digital French kiss (sans Trojan Virus):

Tune in to “2 Broke Girls” on CBS Monday, April 9th!  I have a fun little scene near the end of the show. 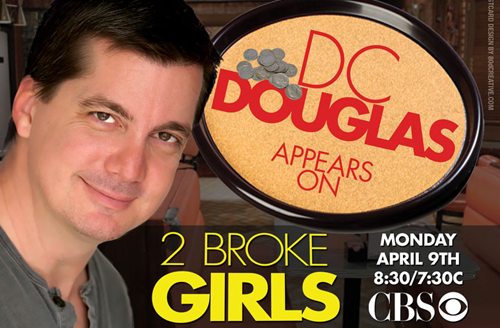 Very happy to offer this new autograph on a print

You guys have no idea how hard auditioning for vid

35 years in Los Angeles and I finally have drinks

From the radioactive ashes we rise... Time to rejo

Am I going to FINALLY finish this insanely long ga

This post is only for @jasonmarsden who turned me

My very first cartoon series regular role was as t

So this was my morning... #voiceover #videogames

There is no time. Only distance. I like this point

This steel town girl is now workin' it with @prcme

I'm not sure @umbrellaspecter is a good photo real

#tbt #throwbackthursday to me on #youngandrestless