Some Movies Are Black Ops

The mission is simple: star in a masterpiece.  As an actor, I receive film scripts every day.  I have my assistant read them to see if it’s something artistic enough to merit consideration.  Once found, I dive into the role and spend months researching the various aspects of the character.  Then, I’m off to an exotic locale to spend three months shooting what will ultimately be a meaningful film – a classic – a work of art…

Then I wake up.

In reality, as a journeyman actor, I pray that my agent and manager submit me on big-budget films while I submit myself on lower budget films that I hear of through the cyber-grape vine.  Most of them never get made.  Some get to the casting process, then peter out due to funds.  And sometimes, if the money sticks and I land a role, I get to make a movie.   I do this because an actor’s gotta act!

I usually only appear in a scene or two (which I prefer).  A “cameo” where I can have fun with a character, but not have to endure 18 hour days, night shoots and bad food.  Afterwards, the film disappears, never to be seen.

But every now and then, one will surface.  That’s the case with Black Ops.  It’s airing on TMC this month and I happened to catch it in all it’s glory yesterday.  While skimming through it, two things occurred to me; first, it’s not very good (I’m being diplomatic) and, second, I had such a blast making it!

I was cast in a minor supporting role as a scientist.  At the table read, I met one of the leads –  Gary Stretch (Oliver Stone’s Alexander).  Then I learned that Lance Henriksen was the other lead.  Not a bad line-up for a low-budget film that I landed myself!

The budget was $350,000 and the story was written in a week after they secured the USS Lane Victory in San Pedro as their location.  (Shooting on a WWII ship/museum!)  On the first day of the shoot, I got a new script with more scenes for my character.  I watched the director (Roel Reiné) work lightening fast with a small HD camera and very few lights.  It was a crash course in low-budget filmmaking.  He really was a Danish wunderkind…  Hope it’s not a faux pa to mix Danish with German… And French now, too!  Aye Caramba!  … Okay, I’ll stop. 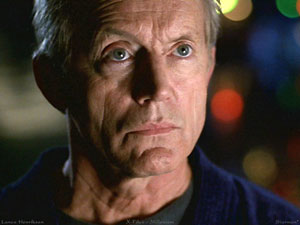 Then Lance showed up.  The first shot of the day was an intricate one involving all of us descending from a helicopter.  So, they set-up these rappel lines pretty high up, then harnessed up Lance.  They yelled “action” and he descended down the line fast and landed flat on his ass.  The set collectively held it’s breath.  A beat.  Lance busted up laughing and the set exhaled.  He was great fun to work with.  A down-to-earth and sweet man.

And also the reason my role got bigger…

Apparently he had worked on the script with Ethan Wiley (the gregarious writer) and Roel for a few days which resulted in my character becoming the antagonist.  All leading up to Lance and I beating each other up!  Actually, that particular night, I had to learn the choreography to kicking his ass and then also strap on squibs to be shot several times… Yes, fun!  That’s what I was saying!!!

Throughout the shoot, Roel would allow a line or two to be thrown in if he thought it helped the scene.  This made fleshing out my character even more fun.  But the best part was when Roel asked me to rewrite my monologue scene that night for the next day’s shoot (with Ethan’s blessing).  He wanted it to flow more and to clarify the movie’s main mystery.

I had a blast writing it that night.  I felt like Ed Norton (only I wasn’t firing anybody!)  The next day we shot it several times.  Their final edit kinda jumbled up what I had straightened out (I was an editor as a survival gig for many years and can be picky), but I did get a longer cut of it and re-edited it down to a teaser scene for my acting website.  Here ya go:

Occasionally I’ll hear from an acquaintance who’s seen one of these low budget flicks and they’ll mention it as though I might be embarrassed by it.  The fact is, I’m not.  It’s work and it’s fun.  It’s part of the life of an actor.

So, even though Black Ops will not win any awards (excluding a Razzie), make millions or elevate my career, I did get to act for two weeks with some really good people (including Katherine Randolph – sporting the silliest prop of the film – and Jim Hanks – the other nicest guy in showbiz).  And if Roel or Ethan asked me to be in another, I’d do it in a heartbeat.  Because a fun, happy experience acting in a B film is far more appealing then being in a “work of art” that muzzles the soul during it’s creation… I assume.  The only “works of art” I’ve ever been in were my own productions! (See The Crooked Eye or look up “D.C. Douglas’ ego” in the dictionary.)