From The Asylum To Youmacon!

What a long strange trip it’s been… And it was just three weeks, a film and an anime con!

[This one is a heavy graphics post. My apologies to you folks in dial-up areas.  You really should move.]

I was tickled to be cast in another Asylum film this year.  Yes, I know they are the king of B films but I love to act and I love the founders of the company.  There are a lot of good people who work on these films.  It’s the Roger Corman factory of the new century and I’m proud to have been in some of their earliest films in the late 1990’s!

And work is work, baby!

I landed the lead antagonist of the film, Associate Dean Marshall, who seeks to destroy the raunchiest fraternity by merging it with a sorority.

Yes, you know the plot.

Yes, this was the kind of film 13 year old D.C. would’ve searched for late night on cable and masturbated to!

But the thing about Asylum films is that the cast and crew are always fun people who work their asses off.  I’ll be writing a longer post with cast and crew names when the film comes out in five months (gotta love Asylum!), but here are a two of my castmates:

My partner in crime, Heather Cohn. 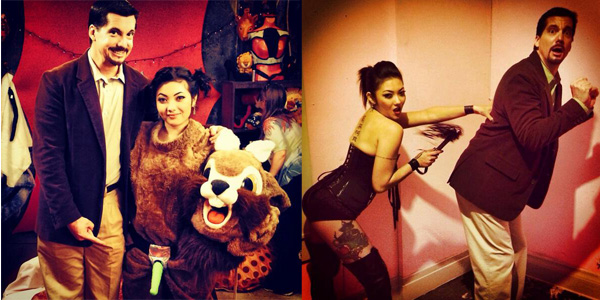 And my surprise nemesis, Sam Aotaki… Protect your nuts.

Two days after wrapping “Alpha House” I was on a plane to Detroit, Michigan for one of the largest cons I had ever been booked.  Even the opening ceremonies blew me away.

I have to give a shout out to my handler and his lovely wife for making my 4 days so fun and entertaining – Matt & Ashley Dusin:

My first signing on Saturday was out of this world!  It wrapped around the COBO hall and I was jamming through the line for two hours before they capped it off!  What a welcome, detroit! Thank you! 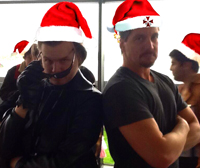 I wanna take a moment and give another shout out to one of my biggest fans in Detroit — Blake Howard Hammond!  The guy is a sweetheart and I enjoyed meeting him.

Blake was even kind enough to give me my very own Wesker Jacket!  Though too small to put on, certainly bad ass to have in the closet and see every day as a reminder that I’m not worthy…

He was at both my panels and very vocal and supportive (he also has the cutest sister and the coolest mom).

No one is allowed to film the panel so that it’s an exclusive experience for the cons that book me (hint hint), but a few images couldn’t hurt…

Now, I’ve been known to imbibe a tasty appletini here and there.  When at cons, I tend to just keep an IV of sissy martinis going through the festivities as I party hop from room to room.  This time round I found myself in a room of Resident Evil fans who were so sweet that I let my guard down.

Around 2 in the morning I asked if I could lay on the host’s bed for a moment (to change the IV).  Within 10 minutes the entire party cuddled me!  Then they requested odd lines to be said in my Wesker voice.  Then we all hummed like a beehive.  This whole incident was later referred to as The Wesker Omlette…

It’s like being back in my drama class in high school.  All hugs and acceptance.  I love cons!

Okay, before ya all go judging me, it was a coed, non-sexual, multi-generational omelette.

However, just in case, I sought this guy out the next day: 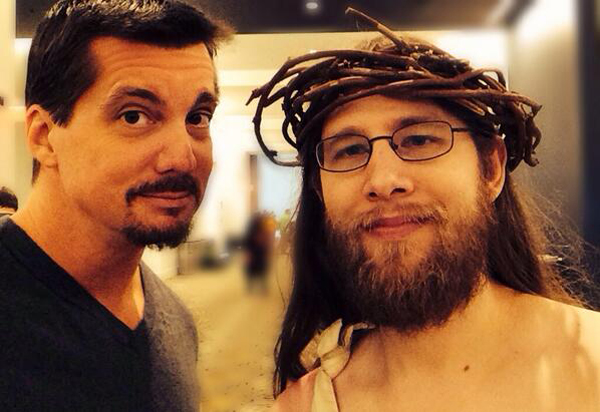 A big thank you to Morgan Kollin for having me out!  It was a blast and I’d love to come back one day!

If you’d like to see more  from Youmacon 2013, check out Kevin Swoboda’s pics!