In 1990, after five smog-filled years in Los Angeles, I had already supported my acting aspiration by working as:

Somehow I knew there had to be a better survival gig.  In fact, I implemented “The Secret” way before the concept had been perverted, packaged and monetized.  I envisioned a job where I could go on auditions whenever I needed to without fear of being fired.  A job where I didn’t have to deal with customers or corporate types.  A job where I could let my inappropriate humor fly out of my mouth without filtering (an ability I sorely lacked).

Enter Lloyd Eric Cotsen.  More accurately, I entered the Princeton Review (he owned the LA franchise then) and interviewed to be his personal assistant.  The woman conducting the applicant screenings liked the idea of Eric having a male assistant so she had me come back to meet him.  He said he was reluctant to hire me because he preferred women in that position (a set-up line for the next sentence).  Unfortunately, most would quit because of his penchant for accidental sexist comments.  The checklist went in my favor:

• Do You Know Macintosh? Yes. Love it!

• Work for $8 an hour? Better than hosting at Denny’s!

He asked about my college education that I had listed on my application.  I said I put it there so I could get a second interview and that, yes, I was admitting it was a lie.

On the first day I learned I was now an assistant to a 30 year old Beverly Hills trust fund bachelor.  I quickly defaulted to resentment.  My duties included buying endless gadgets from the Sharper Image.  Feeding his exotic eel.  Making trips to Sees Candies and to his Malibu beach house – which was a state-of-the-art fun house for eccentrics, complete with glass etched mermaid boobs on the entry doors and a carved crystal phallus.

My resentment grew by the month. It was hardest when reconciling his personal checking account. I would imagine how I could spend all that money in a much better way.

In telling my mother about this, she jujitsu-ed my ass.

“If the tables were reversed and it was your money, would you want him to judge you and tell you how to spend it?”

That adjusted my attitude quickly. In short order, I became somewhat numb to the disparity between his world and mine.

The thing that aggravated many people who met Eric was his inability to concentrate on anything longer than 3 seconds — unless it was an all out philosophical debate.  There had to be new gadgets every week because it was easier for material items to be devoured by his mind.  And he would go through them like Made-In-China electronic McNuggets.  But ideas?  He could stay on one subject for an hour if the debate kept his interest.

This was the first thing that I learned to really appreciate.  It awoke the argumentative bastard within me and I loved it.  It was also my way of getting out of my “to do” list.  I would find something in the news or in his life that we could debate.  This could get me out of work for a half an hour or more if debated properly and with conviction.  One humorous attempt involved debating why we have a leap year – why not just change the way we measure time by a fraction of a second.  He nixed that debate 10 minutes in.

His ADD also fueled his love of creativity, though robbed him of the focus needed for follow through. So he would commission various artists he liked to do amazing works based on his ideas.  That’s how I got to meet Greg Hildebrandt of the Brothers Hildebrandt (think the original Star Wars poster).  Yes, it was a job that had some unique perks.

One day I decided to be ballsy and ask him for funding for the first full length play I had written and wanted to direct.  He said yes. Partly because he liked me, but partly because he appreciated plays and films immensely.  “Artistry Of Hell” became our first production together. 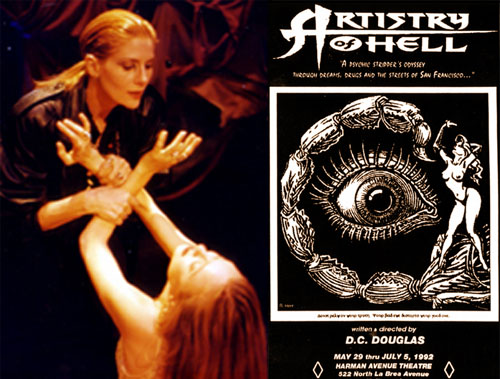 Unfortunately, his investment netted a 70% loss…  And he wisely passed on the next play I produced.

Eric once remarked he was surprised my girlfriend was so beautiful considering my average looks.  This was a genuine remark of surprise and a byproduct of his unvarnished honesty.  Sometimes it was embarrassing to witness, but it was also an invigorating quality I learned to really admire.

Though this, too, had it’s evolution.

By 1992 I was making $10 an hour but could barely meet my rent, car, insurance and acting career costs (LA is expensive, Middle America, so quit your sniping).   Whenever ADD Boy would holler out, “D.C.!  Put on your list that I want the name of the people who make the wrappers for Sees Candies.  See what it would cost to have a line art drawing of my face printed on it, encircled by large women’s breasts.”  I would begin to coil up.  It got to the point that whenever my name was hollered out, I immediately yelled louder, “WHAAAAAT?!?!?!?”

It seemed like an unhealthy relationship, so I put in my two weeks notice.

During those two weeks we both got a little sad.  He probably did because I was the best assistant he had had at the time.  I got sad because it was the most unique job I had ever had and he was the closest thing to a bossy big brother I had experienced.

Three days before I was to leave, I mentioned that a raise could keep me there.  From that, we started down a new path.  First, my job was split into two; half the day I was an assistant.  The second half I would do accounting and errands for his two new business ventures at a higher rate.  A new assistant would be needed, as well…

This, in turn, led to him challenging me to create a business plan for a 900 line that he had envisioned.  The Party Tracker.  This is where he harnessed my creativity and awakened my entrepreneurial spirit.

With his other assistant, Gena Cadiente, as my partner – a business plan was created and a 900 line was born:

Unfortunately, after the launch of our Los Angeles 900 line we realized the business guide we based our numbers on was a national 900 line plan! We hit our numbers for a local line, but the cost of reviewing and updating Los Angeles clubs every week was waaaay more expensive!  On the upside, I learned about programming, got a lot of voiceover practice recording all the reviews, and picked up a healthy paranoia about fine print.

Now the seed had been planted.  We approached him with a new business plan for an actors edit bay – a place where actors could get their demo reels done.  He accepted.  That was the day I moved from “Guy Friday” to management.  I had become a video editor/office manager/part-time actor.  And that was okay with Eric because he had hired four other assistants by that time!

The Planet Of Video

Through Planet Video, I became a pretty snazzy editor and could create tight, interesting demo reels within 4 hours. But I was still an actor and needed to act.  So, with the money I made from recurring on NBC’s Boston Common, I had half of my budget for a film short.  I asked Eric if I could borrow the other half from him (with a “deduct from paycheck” provision).  He said yes, and my first film short came to life:

[You can see the entire film on my acting website.]

Planet Video became successful enough to break even for many years.  It would’ve made a profit, but we couldn’t help ourselves when new technology emerged.  And, like I said, Eric loved gadgets.

By 2004, I was ready to risk financial stability and sink or swim as an actor and voiceover artist.  I handed Planet Video over to others and started promoting myself full time.  Between using all the skills I had picked up during my years employed by Eric and the slow ripening of fruits from 20 years in the business, I was relieved to find that my acting and voiceover could actually sustain me month to month.

When I look at how I got here, among the people I have to credit is Lloyd Eric Cotsen.  He never hooked me up with any powerful producers or directors (fucker), but he did enable me to acquire:

• The computer skills to edit, produce and promote my film projects.

• The business sensibilities to create My Voiceover Guy.

• The freedom to be a struggling actor who could still eat and pay the rent.

• The ability to see my own opportunities.

He’d be the first to say he did it for selfish reasons.  But it wouldn’t be completely true.  For example, just because his girlfriend at the time couldn’t fly to Europe with him didn’t mean he had to take his assistant.  He said I’d be carrying the bags.  That wasn’t the case.  He was a friend who showed me Europe, took me to see Harold Pinter on stage (and where I was told to keep my laugh down by three audience members), bought me a suit on Savile Row just so we could do tea at the Ritz, and took me on a train ride through Switzerland.  That trip inspired my yearly vacations – whether I can afford them or not!  (At least I won’t regret not having traveled when I die.)

Being that I’m a bleeding heart sentimental sap, I have probably thanked Eric for these things in one form or another over the years.  But just in case I missed any aspect of what he’s done for me, let me do one final big, fat, wet and sloppy gracias:

Eric, thank you for the chance to create the life I have now… And for keeping me out of restaurant work.  😉

[This is part of a series – Love Letters]