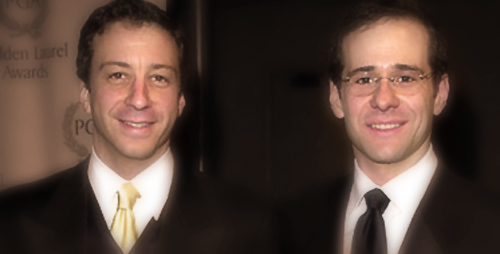 Love Letter To Kohan and Mutchnick

David Kohan and Max Mutchnick changed my life.  They probably aren’t aware of this fact since they’re too damn busy being one of the most successful producer/writer teams in Los Angeles.  Let’s take a trip in my “Way Back” blog machine to fully understand why.  Please keep your hands and feet inside the blog at all times.  No hurling, either.  I’m a sentimental actor, not an investigative reporter!

In 1995, I was more of a theatre actor… An Equity Waiver theatre actor… Okay, an actor who did any play just for the opportunity to maybe be seen by the assistant of some casting director.  I had worked a few television jobs, but hadn’t gotten any traction.  In my career depression, I booked a trip to Europe to escape the fruitless hustle.  My most recent gig was one line on a short lived Tony Danza show, “Hudson Street“, so I wasn’t carelessly stepping away from an amazing pilot season.   Then, my agent called.

He was “old Hollywood” through and through.  A gravel voice and foul mouth, offset by a twinkle in his eye… Or just watery eyes, hard to say…  (I once delivered my headshots to his house in the Hollywood Hills.  He opened the door shirtless, gold chains intertwined with grey chest hair, drink in hand and a little yappy dog going bizerk around his legs – yes, this was a Hollywood agent, by god).  He had an audition for me – a one line role on a pilot, “Boston Common,” which, if I booked, I would go straight to a table read, then a week of rehearsals and final taping… But I was leaving for England in three days!

“Kid!  If this was some crappy show already on the air, I’d say f@ck it!  But it’s a pilot!  All bets are off.  They could make you a regular.  Or you could get cut before they even tape the pilot.  It’s a goddamn crapshoot!  What do ya want from me?!”  He had a great way of leaving you more confused then persuaded.  I figured it was a chance to be seen by a casting director and the odds of booking it weren’t high.

Vicki Rosenberg, the casting director, came  into the waiting room where all the actors sat after auditioning and pointed at me, “D.C., please stay.  Thanks everyone!”  I signed a contract and was shuttled to the stage for the table read.

There, I met the very talented cast: Anthony Clark, Hedy Burress, Traylor Howard, Tasha Smith, and Steve Paymer.  The director was the hysterical James (Jamie) Widdoes (“Animal House” actor).  Seven days later, I delivered my one incosequential line, and it was over…

Days prior to the taping, the show had to do a “Network Run-thru” which means the big-wigs from NBC come down to watch each scene, moving like a gaggle of geese from one set to the next.  I hadn’t seen a lot of the scenes and was in the crowd, moving with them.  I laughed freely at some genuinely funny stuff.  Mind you, my laugh has been inherited from a bawdy burlesque dancer (my grandmother) and is more like a very loud cackle with falsetto tinges…  I kinda stand out – and some would argue that I get others laughing more freely, too.  Max Mutchnick was standing near me and kept looking over his shoulder to see what animal was being skinned alive.  At one point he said, “If we get picked up, we’re bringing you back just for your laugh in run-thrus!”

Thus, a seed was planted…

Since I had pushed my trip back a week, I kicked back into hustle mode and sent Max and David a basket with champagne and a card wishing them much success with their pilot.  Then I hopped on a plane.

While in Denmark, I called home to check my messages from a payphone (for you youngins, it’s like a cell phone, but is a bit heavier and lacks bling).  There it was; Max calling to thank me for the basket and then saying he will definitely have me back if they get picked up [get an order for more episodes].  He sounded genuine, but so does everybody in L.A. before success.

Three months later, Max Mutchnick and David Kohan (after receiving a pick-up order of six episodes) blew my mind and had me back to play a different role.  I was so grateful that I put together another, bigger basket to thank them.  Then, while at the cast party, Max and David wondered aloud if there was another role for me in the next episode!

There was.  Two days into that week’s show, the character I had been cast in had a name change.  He was now called “D.C.”  My heart stopped.  I immediately tried to think up a new gift to send them.  This is where the relationship became a bit dysfunctional on my part.  Somehow I thought my hustle was the reason I was getting more episodes.  So, for every episode I was cast in, I had to think how to top myself with a specialized gift for them.  It never occurred to me that maybe they just liked my personality and my talent.

For 10 episodes, I lived in fear I wouldn’t get another episode.  This became a life lesson – enjoy your life while it’s happening!  Unfortunately, I didn’t learn that until it was over.

And end it did.

NBC moved it from “must see” Thursdays to Sundays where their core audience would be cramming for exams and not watching TV.  Stupid move on NBC’s part.  But it did lead to David Kohan and Max Mutchnick creating the groundbreaking show, “Will & Grace,” where they changed much, much more than just the life of one struggling character actor.

As for me (and the reason for this love letter), I was able to land a good manager, a hungrier agency, and, most importantly, I was able to walk into auditions with a new confidence –  discovered through the generosity of Max Mutchnick and David Kohan.

[This is part of a series – Love Letters]