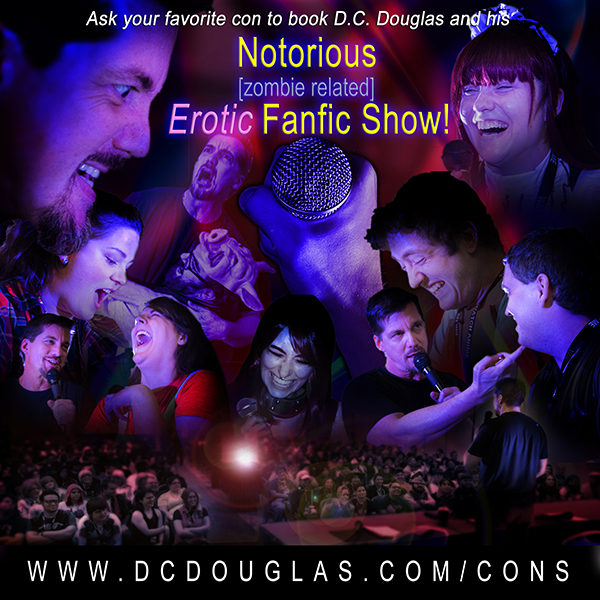 1/10/18 UPDATE: I had no idea this show would keep going and that people would come see it repeatedly! Very thankful. It has grown to a 2 hour show and every year I try to tweak it a bit so repeat participants have something new to see (in addition to the always new reactions from my onstage victims…)

Since I debuted this “panel” at Florida SuperCon in 2013 it has grown to 90 minutes and has been tweaked and polished to the point where it is, truly, no longer a panel. It’s a damn show!

If your local con has Resident Evil fans in attendance, you need to have them book me and this show. It’s equal parts funny and sexy.

It does NOT feature any images or live acts that would preclude anyone for legal reasons. However, I find it best to call it an NC-17 Show. 17+ is fine. Also, there is no late seating for this event… You need a certain amount of time to get “warmed up.”

To help convince your favorite con to book this, have them read these reviews from past audiences (from FaceBook and Twitter, so prepare for cyber misspellings!):

For more on booking me, including credits, schedule and other panels, go here.

Garrus Redfield: Best panel ive seen. Saw it at Youmacon 2013 then again at Anime Midwest 2014. It never gets old.

Brian Cummins: Gives a new meaning to the phrase “seven minutes, seven minutes is all I can spare to play with you…”

Jess Kugler: Saw it at Anime Midwest 2014. It was my absolute favorite panel out of all panels I’ve ever been to. It is a panel that every congoer needs to experience.

Stephanie Derksen: A ton of fun to see, even funner to participate. A must-see if you’re a fan of Resident Evil, and even if you’re not, you’ll get a kick out of this unique experience. You’ll never play RE the same way again.

Keebler Elf: Out of all the panels at anime midwest this was by far the best and made a realativly disapointing week worth the trip from michigan. Id go again if I had the chance to. D.C is amazing and makes awkward fan fics funny and silly for everyone to enjoy. Id of liked to of gotten a pic and a autograph but I didnt get a chance to maybe I will next time if you come closer to detroit.

Raychem G. Bando: It was absolutly hilarious! I hope to see it again in the next con.

Lindsay Shepard: This is the one panel I always refuse to miss! Fun as hell to watch and even more so to participate! Always keeps the crowd on the edge of their seats and roaring with laughter at the same time! No one does it quite like D.C.DOUGLAS!

Burning Beard Jewface: It was absolutely unforgettable. One of the most entertaining panels I’ve ever attended, true to character, and wonderfully presented, and as I said on your video. I came, I saw, and I came again.
-Leonardo Sivilla

Beth Green: You will never see another panel like this, nor will you laugh, gasp and cheer as hard as you will at this event. Give in to your curiosity, let go of all inhibitions and find out why Albert Wesker only needs 7 minutes…

Matt Dusing: This panel will shake the world as you know it! Seen it twice and it gets better every time! D.C.s voice soothes the soul and Wesker’s voice destroys your naughty parts. A must see.

Garrus Redfield: D.C. I have to say the Hollywood actors panel was also extreamly interesting and helpful to us trying to get into the field.

Zack Fair: One of the best panels of all time, first panel i ever went to was D.C, Jon st John, a.d the claptrap guy. Couldn’t stop laughing.

Maddie Delforge: That panel made my whole con and getting to participate in it was the best decision of my life. Let’s just say really bring your acting side to the table and go with it! I say that everyone needs to see this panel ASAP!!

Kate Price: I have never laughed so hard, but I what I heard what amazing, terrifying, and enjoyable at the same time. Never will I have another experience like this panel.

Osten Messer: One of the most entertaining panels I have ever been to. Witnessed it’s awesomeness at Animineapolis. Rated R for “Really freaking hilarious”.

Angel Figueroa: Was there at anime midwest 2014 was without a doubt the best panel!! I laughed so hard and cried a river that’s how funny it was! Highy recommend going if D.C. Douglas is at your local con you won’t regret it!!!

Daniel Duffee: A more hilariously raunchy time has not been had since the first Porky’s movie. Only it’s much, much better.

Deanna Gomez: I saw it at Anime Midwest 2014. It was the best panel I’ve ever went to! I would’ve liked to see Albert and Leon go at it

Ashley Kootsillas: Saw it at Youmacon 2013, the BEST panel I’ve ever attended. I laughed so hard I was crying the whole time. Also full of surprises!

Evan D. Humphreys: You need to see it. That’s really all that can be said about it. I saw it next to a rave, the vibrations of which only added to the setting.

Nick Lato: Best panel I have gone to at a con. Absolutely hilarious

Beth Green: That made my entire weekend!! Hoping you come back next year. Have a safe trip home!

Jason Kinnison-Holmes: If this panel took place at next year’s Kitacon in Birmingham, I wouldn’t be too surprised if there ended up being a packed room, that’s how popular this panel would be…

Josh Vanpatten: was my first time ever being to a con and i got to say the erotica with u was the best

Keebler Elf: Was there and I died your awesome

Chris Woodbury: If you want fucked up and surprisingly funny, then this might be your cup of tea.

Jared Zimmermann: O it’s a cup of something alright

Stephanie Derksen: Worth it, y’all.

Have YOU seen it? Add YOUR review in the comments section below!