A Voiceover Guy In Wonderland…

I like an adventure.  So I followed the white rabbit down the digital hole and spent three days in an anime underworld.  I had tea with the Mad Hatter (or rather Irish Car Bombs with Troy Baker), traded witticisms with the Cheshire Cat (randy jokes with Chris Patton), and generally got “wonderfully” confused with the Frog Footman and the Queen of Hearts (my late-night guides Steve [funny British guy without a last name] and Christine Ruggles [sardonic rebel who’s really just a kind sweetheart]).

This “Wonderland” was actually the Animation and Gaming Con of Ohio – and my first con!

7:00 am – Sitting on the plane next to a woman obsessed with the stock market and plagued with very bad body odor.

2:30 pm – Checked into the Holiday Inn in Cincinnati, Ohio.  A nice hotel with a Vegas quality main area, replete with waterfall and high decibel chatter.  The Con was forming – a coming together of hippies for a political purpose… Wait, that’s not right.  A coming together of pink and blue-haired teens and twenty-somethings for the purpose of role playing and interfacing with like-minded humans.

4:00 pm – Greeted at the hotel bar by my con liaison, Nick, and fellow voiceover guest, Troy Baker.  Then the drinking commenced… Oh, did it commence.

My liaison (or wrangler) Nick!

6:00 pm – Backstage for the opening ceremonies.  The other voiceover guest, Chris Patton, joined us and we were greeted by the man behind it all, Jason Taylor – replete with Heath Ledger Joker make-up.  Only later did I find out that under the make-up he was a dead ringer for Jeffrey Donovan on Burn Notice!

6:15 pm – Nervously took to the stage to say hi.  I hate not having a script or rehearsal, so I have erased this part from my memory.

6:30 pm – Back at the hotel bar.  Met Manny Camacho of GPX Gaming. He’s an ex-military guy who runs his events like a battlefield operation while still being able to have a blast.  Plus, he could kick my ass within inches of my life, then offer medical treatment on the spot…  Good guy to have around during the apocalypse.

9:00 pm – Guest autographs.  I am blown away that people actually wanted me to sign anything.  I have some anime credits, but not that many.  I didn’t think there would be too many Resident Evil and Mass Effect fans there.  But there were enough to keep me busy!  Plus, some people found games I had completely forgotten that I was in! 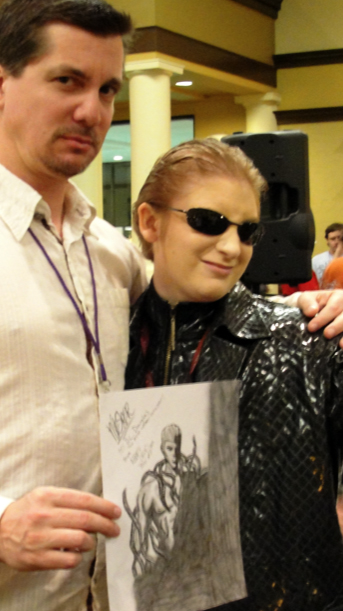 I have to take a moment here to give a shout out to Abbey Collins.  She gave me an Albert Wesker pencil art drawing that was just fantastic.  And her outfit was pretty remarkable, as well!  A talented young lady.  Unfortunately, when it came time for a picture,  I thought I was to look as bad-ass as Albert Wesker – which, with my face, translates into an arrogant “a-hole actor” look in a still picture.  Sorry Abbey.

Jason had told me to bring some 8x10s to sign, but when I sat at the table, Chris and Troy looked at them and cracked-up.  Apparently the fans supply the things to sign… game cases, posters, scrolls, backpacks, badges, game consoles… It was endless!  My headshots seemed a little presumptuous and old school.  After all, they don’t care about my face!  They just want my voice signature!

Midnight – Nerdfit.com podcast interview with Erik “The Internet” Ferris [Tweedle Dee?] and Glenn “Billy Mays” Dubois [Tweedle Dum?].  I was having such a good time drinking with Troy Baker that I requested we do our interviews together.  You can hear the podcast at Nerdfit.com, (but please note:  I was a bit tipsy and the language and subject matter might offend some of you or your grandparents!).  Erik and Glenn were a blast and very gracious.

Steve “what the hell is your last name” funny British guy…

1:00 am Saturday morning – Shots of Jameson outside of the hotel with the Nerdfit boyz, Troy & Chris, Jason Taylor and my late-night guides, Steve and Christine.  I never realized how good Jameson was straight from the bottle!  Chris and Troy, being the con vets they are, went to bed.  I, being the con novice and late night owl I am, followed the Frog Footman and Queen of Hearts further into the rabbit hole.

Noon Saturday – Guest Q & A.  Here is where I saw why Troy Baker is the rock star of these conventions.  Yes, he has a helluva list of credits (as does Chris Patton) and he’s got that sexy anime haircut (I’m straight, but I can spot sexy)… But, man, does he know anime.  I mean REALLY knows it.  He took the mic and turned what could’ve been a very subdued and fragmented panel of three hung-over guys and turned it into a fun and informative hour of, yes, you guessed it – Q & A!

Troy Baker has amassed many game and cartoon credits in a short seven year period.  You probably know him from Final Fantasy XIII, Darksiders, Call of Duty, Ghost Busters, Naruto, Trinity Blood. He’s also an on-camera actor, having played the lead in the CBS mini-series Comanche Moon as well as many other films and TV shows.  He’s also a fun and knowledgeable guy.

Chris Patton is based in Texas and works his butt off.  You know him from Halo Legends, Fullmetal Alchemist Brotherhood, Shin seiki evangerion, Shonen Jump One Piece, Appleseed Saga: Ex Machina, and hundreds more. He had me in stitches with his sharp wit and observations. I hope he relocates to Los Angeles one day.

2:30 pm – More autographs!  I really dug meeting the fans one on one.  So many kind, intelligent and friendly people.

Saturday night – Surrealism kicks in.  The Holiday Inn is rockin… or ravin’?  Or Pokemonin’?  I was now officially jet-lagged, hung over and losing an hour for Daylight Savings Time.  I was feeling like Alice now, after obeying the “drink me” note on the Malibu Rum bottle… Though I remained in my jeans, it seemed like a good place to put on a blue and white dress if the mood struck…

There was an over 21 party where Manny and GPX staff shared stories that made even me blush.  There was a concert by Protomen that made me feel like I was 17 again (bless you guys for “Total Eclipse of the Heart”!).   There were spontaneous gatherings of people sharing game strategy and character analysis throughout the hotel.  It all felt like a blending of a renaissance  fair and a pg-13 Burning Man.

10:00 am Sunday – Jason was kind enough to set up a Resident Evil 5 panel for me.  But when I got there, it was apparent that the spontaneous “how do you prefer to kill zombies” panel was rockin’ and I didn’t want to stop a good thing. (When asked my preferred method, I said I’d give in and become one.  Why fight the will of the people? Plus healthcare would no longer be an issue.)

By Sunday, in fact,  I was a zombie.  My dark circles under the eyes, unkempt goatee, and travel zits were “dead” giveaways.  There was one more informal “hang-out” signing with con crew and fans, a photo op in Decepticon Motormaster, then a closing ceremony and off to the airport.

I have to say that I felt a certain instant closeness to some of the folks.  It reminded me of doing theatre and how, after six weeks of production, you become family.  This was only three days, but I felt like I was leaving good friends.

When I think about what the whole con “thing” is, I’d have to say that it is a gathering of like-minded people (many of whom are young folks experimenting with identities) who also happen to be highly intelligent, kind and creative and who just want to lose themselves in a large real-life fantasy for a few days – an earthly manifestation of their favorite games and cartoons.  But most importantly, they want to have that human connection.  I think this captures the mood best:

While having breakfast at the hotel, I saw a group decked out in cosplay outfits come in and sit.  One girl had pink hair and an angel outfit.  (I’m sure some readers will know who she was cosplaying, but I just thought it looked cute.)  Then another girl who was walking by and dressed in an angel outfit and pink hair stopped in her tracks.  She walked over to the first girl and asked for a hug.  The other girl excitedly gave her one (obviously strangers to each other).  Then the second girl went on her way…   How cool is that?

Manny explained to me that many cons are for-profit ventures with corporations behind them, but Jason Taylor set his up as a non-profit.  A non-profit!  He does it because he loves the community of gamers and cosplayers.    Knowing that made me very happy that my first trip into Wonderland was at his A & G Ohio Con 2010.

One last thing:  Many fans of the video games I’ve done have asked me to come to the so-and-so con in their hometown.  I’d love to, believe me.  But the decision isn’t mine – it’s the cons’.  And the really good cons get their ideas from the fans.  So, if you want me to come to yours, don’t ask me – send an email to your con committee.   And who knows?  Maybe I’ll be in your town soon!

Alice: But I don’t want to go among mad people.
The Cat: Oh, you can’t help that. We’re all mad here. I’m mad. You’re mad.
Alice: How do you know I’m mad?
The Cat: You must be. Or you wouldn’t have come here. 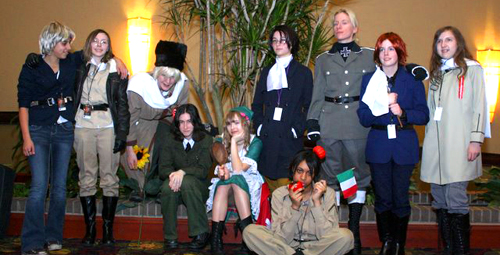