A Mass Effect of Fans

Posted by: D.C. Douglas on March 14, 2012 in Animation-Games, Live In Person, Resident Evil

Last week was an exciting videogame-themed seven days for me.  On Wednesday, Mass Effect 3 was released (along with Street Fighter X Tekken in which I play Raven), followed by a whirlwind visit to Ohio for the 5th Animation & Gaming Ohio Con.  More on Mass Effect 3 and Legion (the character I play) in a moment.

First, the visit to A & G Ohio!  Though I’ve done a fair amount of anime, none of my credits are prominent enough to inspire other anime cons to have me at their events.  But playing Albert Wesker in 4 videogames and Legion in 2 was good enough for these folks!  And what great folks they are!

Started as a non-profit by Jason Taylor, A & G Ohio has grown fast in 5 years.  My first con was A & G Ohio in 2010 and I thought it was a small, charming con.  This weekend was my second time there and second con ever…  And it was much larger and busier! 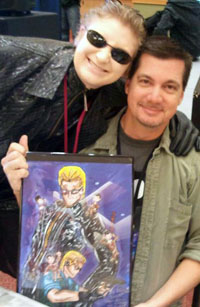 But one thing remained from the first one; the fans and their consistent kindness.  I can see how doing these cons is such a treat for voice actors who, for the most part, go unnoticed throughout most of their careers (unless they are also on-camera actors or as beautiful as Troy Baker).

At one point, I was chatting with a staff member when a guy came up with a question for her.  A mischievous grin crossed her face and she introduced me as “Albert Wesker” and “Legion” to him.

He took a couple of steps back and placed a hand on his chest, as though the wind had been knocked out of him.  Now I’m used to being the butt of jokes during my weekly poker night (7/2 unsuited?  ALL IN!) so I assumed he was mocking my pseudo-celebrity status at the con.  But, no, he was sincere and I felt like a douche for making a joke about it.

Interestingly, during my 38 hours there I came across fans who had varying opinions about Legion’s final scene in Mass Effect 3.  Then it hit me.  Legion’s unique recording process for the game.  Warning: spoilers ahead.  Skip over the next section if you hate spoilers or ninjas.

Most gamers know that in Mass Effect 2 you can either save my character or let him die, depending on your rationale (“Dude, synthetics have no soul — f**** him”). So, when we started the Mass Effect 3 sessions, I noticed my script referred to my character in 3 different ways.  Turns out that if you let me die in ME2, when you meet me in ME3 it’s the same as starting a relationship with me all over again.  I’m rather cold. I require a nice dinner at The Olive Garden.

If you kept me alive, though, I have more warmth and personality throughout the game. Getting to second base with me is easy.

And then there are those lines that are “neutral” and are used in both scenarios.  It was a fascinating acting exercise when we were recording as I switched Legion’s persona from line to line.

This also means that, depending on how you left me in ME2, my last scene can be sorta sad or quite heartbreaking.  See some of the variations below:

And since both games that came out last week were in the hands of autograph seekers at the con, here is Raven and two other characters from ME3 I voiced, just to thoroughly spoil the plots:

I’ll admit that having people constantly asking for my signature or hugs over a weekend was a  complete guilty-pleasure and an unnecessary ego boost.  And I’m pretty grateful to Capcom and EA/Bioware for putting me in that situation!

[Side note] Many asked me why I wasn’t doing more cons.  Alas, the cons need to hear from their attendees.  If you want me at your con, you have to ask them.  I get a kick out of the experience and my manager is easy to work with.  Just have them email news[at]thespiegelgroup.info.

The VO guests that were with me this year were major veterans of anime –  Richard Epcar (who also has directed me in several anime projects), the lovely VO couple of Michael McConnohie & Melodee M. Spevack, as well as Halo‘s Master Chief, Steve Downes.

Steve and I arrived around the same time and so we were driven to the hotel together.  During the ride I discovered he used to be a DJ on KLOS in Los Angeles in the late 80’s – leading me to have my very own fanboy moment in the car – “Oh my GAWD!  YOU’RE Steve Downes!”  He was great about it and signed my man-boob.  😉 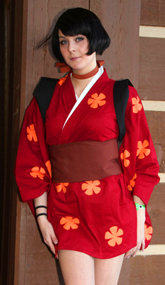 I hadn’t met Steve before and I had a blast getting to know him.  Even our panel turned out great considering neither of us knew what we were supposed to be doing! It was called On The Spot Dubbing but we didn’t have a microphone, a way to record people, a video to dub to, and, well, you get the picture.  But thanks to our Panel liaison’s quick improvising (adorable Christine Ruggles) and Steve and I brainstorming, we pulled together an entertaining panel in 5 minutes.

Later, I had my own panel that involved some trivia, a titillating twitter contest, and some free gifts and videogames.  There was drinking, inappropriate questions (I’m looking at you, Lindsay Siesel) and lots of yelling (I’m looking at you, D.C. Douglas). Wished we had 90 minutes! 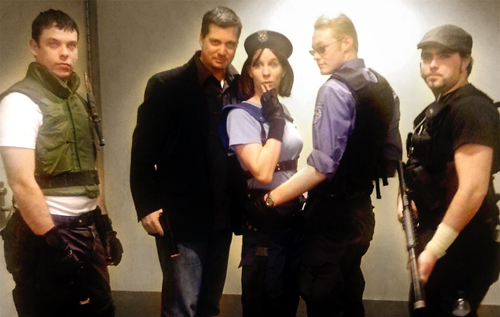 Cos-Playing A Younger Version of Myself

Unlike the respectable guest voice actors there, I hung out with the twenty-somethings until 5 am, dancing my way to a sore back with Tom Cruise and Elaine Page look-alikes (Josh and Mel Rey), Cosplay Goddess “Ruggles” and my rockin’ guest liaison Ally Scarbrough, as well as several other lovely characters whose names I won’t write for fear of getting them wrong. 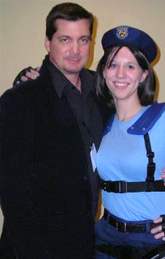 Yes, I even hung out in a stranger’s hotel room that was replete with spilt drinks, tipsy cos-players and cigarette haze while downing delicious shots that ranged from fruity concoctions to straight Everclear (which added three hairs to my chest, making it a total of eight, baby!), all the while wondering if Ohio law states the oldest person at a party is automatically responsible for everyone there.

After dancing like a dorky white guy for a few hours I ended up back at the stranger’s party, sitting on the patio, resting my head back against a cushy wall.  A cushy wall “pillow,” if you will, that turned out to be a built-in ashtray overfilled with cigarettes – as Ellen Page pointed out to me.   But I didn’t care anymore!  I was giddy, exhausted, and I swear I could also hear strains of “I won’t grow up…” in my head as the clock struck 4:30 and the plane ticket in my wallet read 8:30…

In all honesty, I didn’t have a sudden middle-age crisis that night.  I just connected to the memory of the kind of kids I used to hang out with when I was young.  The kind of people I still gravitate to now.  Smart.  Joyful.  Silly.

Because that’s the kind of life I like to live.

And that’s why I loved going to this con.  For the “mass effect” the fans had on me.

In my last blog post I ended up getting my airdates wrong.  Since then, a new one popped up, to.  So, here are the correct dates: