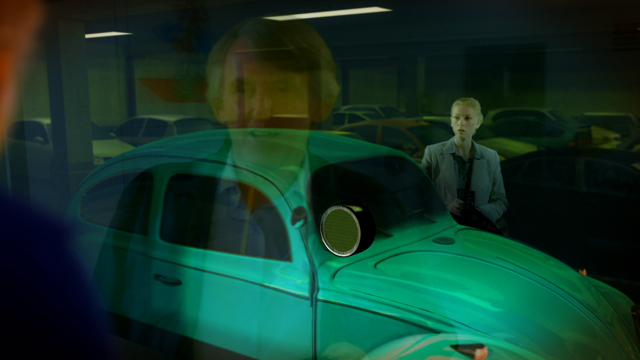 Hollywood Droughts And My Crooked Eye

Most film and TV actors in Los Angeles spend more time waiting to land their next job rather than working that next job. Probably 95% waiting, 4% working, 1% weighing other career options. If the ratio is better than that, you are a major success, baby! Or, you act in commercials and/or do voice overs.

When the film/TV drought gets too much for me, I tend to drain my savings and feed my creative soul (known around here as Art Monster) with short film projects.  I’d venture into feature films, but I can’t stomach that new kind of rejection. The regular rejection in acting is satisfying enough for me.

In the last 15 years, I’ve produced, directed, written and/or acted in dozens.  Many of them can be seen at the Hit-The-Fan website.  Some have played the festival circuit, such as “Duck, Duck, GOOSE!“, a farcical comedy.

My latest film short, “The Crooked Eye“, was the biggest passion project I’ve ever funneled commercial residuals into.  I made it as a gift for my mother.  She had written a short story in 1995 that was published locally.  I had always intended to make a short of it.  It took me 12 years.

In 2005, after completing “Duck, Duck, Goose!”, some friends and I shot a silly music video (80’s Man) on green screen. It was fast, fun and only $600! This made me think of doing my mothers story in a unique way – on green screen.

During the run up to it, a mad genius VFX friend offered to do the visuals in Shake and Maya, making it look more like Sin City than my cheesy 80’s Man video…. Well, the combination of his youth and my ignorance led us down a road that took 2 years and $45,000 (only $25,000 over budget)! And it almost didn’t happen, but I was hell-bent on finishing it. By the end, I had 3 computers going 24/7 in my office with a displaced girlfriend growling at her laptop on the couch.

Of course, my mother had no idea it was being made. Apparently she never Googles her name (a noble quality, I’ve come to believe). I told her I was making a sci-fi short called “Oxygen” with Linda Hunt narrating, and she bought it! ??The whole point was to get her to the cast and crew screening and give her a special moment of seeing her art merge with my art… She almost didn’t come, but I pulled a little family guilt. Needless to say, she was pleased, if not a bit stunned.

Then the festival run. To date we have played 12 festivals, with more to come. However, I’ve noticed that many of the festivals don’t seem to know how to program our film. It’s a subtle psychological portrait with a surreal visual style. Tonight, the Los Angeles International Film Short Festival – LA FilmShorts – programmed it as the first film in a 90 minute sci-fi block! Don’t get me wrong – I am jazzed to be in their festival. But it seems like no one is really seeing the film for what it is. Programmed inside a dramatic block of films would be appropriate and would speak to more people. Those looking for spaceships and explosions will always be disappointed in a short film about self-esteem and perception!  Kind of like swapping out someone’s porn with PBSs’ “Nova.”

What do you think? Come see the film next week at the HollyShorts Film Festival or the Malibu Film Festival, then drop me a line. Or speak to me after the Q & A, as I should be at both.