My sister and I jumped out of the dusty Dodge Dart and rushed over to the ticket booth.  It was to be our first rodeo since moving up to Tuolumne in the Sierras.  Our mom followed quickly behind.  She tended to walk much faster than she drove the mountain roads.

“Hurry up, Mom!  It’s starting!” my sister yelled as cheers from the arena echoed by.  As soon as Mom reached the booth she saw that the rodeo tickets were one price.  She asked the craggy-faced ranch lady in the booth if they had any children’s discounts.

“One price fits all, dear.”

Finding work in the 70’s was difficult to begin with, but for a single mother living in the “boonies,” as she often called the area, it was practically impossible.  Realizing she didn’t have enough money for all three of us, she walked us back from the booth and told us she would wait in the car while we went inside.  The decision was immediate and selfless.

It was one aspect of an ever evolving parenting philosophy – a philosophy partly based on not repeating her parents’ mistakes, nor perpetuating society’s.  It also encompassed a few unique approaches…

Like the day she discovered I had burned a perfectly round hole in the carpet – a folly from my short lived pyromaniac days with the “bad seed” kid from the downstairs apartment.  We had put crumpled paper into a kitchen pot, brought it into the living room and set it on fire.  Seemed like a great idea.  We watched it burn until we noticed ash was beginning to rain down on everything.  I poured water on it and went to pick it up — but the melted carpet underneath refused to let go!  Obviously I was new to physics.

I desperately tried to dust everything and rearranged the throw rugs so that it covered the big black spot.  Perhaps I could keep this secret for the next seven years?

No. Just a week.  Mom sat me down and asked me to explain to her why there was a big round burned spot on her floor.  I quickly concocted a story about how some unknown kid knocked on the door one morning and when I answered, um, they burst into the room with a pot full of fire and put it on the carpet. (I’ve never been good at improv.)

My mom sighed and then calmly said, “If you tell me the truth, I won’t punish you.  But if you lie to me, I will put you through that goddamn wall.”

Mom picked up a pad of paper and a pencil.  She asked me to go over the details again, grilling me on every aspect. “What was this boy wearing?”

“The pot must’ve been very hot, did he have special neoprene gloves on?”

“So, let me get this straight.  A boy you don’t know knocked on the door while carrying a pot full of fire, pushed by you and placed it on the floor?”

“Yes,” I said, as a sinking feeling twisted my stomach.

“It would take at least a minute for the pot to do that much damage.  You just let him burn our carpet?”

“No, I tried to stop him, but he punched me in the stomach.”

Eventually, I fingered the kid next door.

“Let’s talk to him, then.”  And with that, she got up and went outside with me watching from the door.  She looked back at me, giving me one last chance, then the grandmother answered the door.

My mom smiled and said, “I’m sorry, my mistake.”

The door shut and my mom turned back and chased me through the apartment into my bedroom, somehow managing to get me across her lap (I was almost her same height by that age) and spanked me.  The first time in my life.  It didn’t hurt much, but the indignity stung.  That was the last time I told a huge lie to my mother.  From then on I stuck with little white ones.

At 17, I had a huge crush on Lorraine, a 16 year old girl from school. She had gotten in trouble at home and was kicked out by her father.  I told her she could stay with me for a week until she could take a Greyhound bus to Santa Cruz to live with her sister.  For six days, I would get off of work from my busboy job at 11, pick her up on my moped, drive to my house and sneak her upstairs to my bedroom.  My mom was usually asleep at that point.  We did that for five wild and romantic nights.  And for five precarious mornings, she would sneak out by climbing through my bedroom window and across the garage roof.

On our last day together we went to Golden Gate park and had a beautiful, bittersweet romantic day together, colorized by psychedelic mushrooms.  We arrived back home at 11, only to find my mom was still awake!

Lorraine sat down outside the front door while I went inside and sat on the couch.  Mom was doing laundry, but was on the last load, thank God.  Everything seemed fine and when she went to the garage to move the load into the dryer, I ran to the front door to get Lorraine upstairs to my room.  But just as we entered the hall, Mom came back in, so we ducked into the hall bathroom.  We sat in there for 10 minutes, at a loss as to what to do.  Then my mom knocked on the door.

“I need to get in there for my vitamins.”

Vitamins?  At night?  I grabbed all the vitamin bottles and brought them over to her at the couch, muttering about food poisoning.  Then back to the bathroom for another 10 minutes.  She sat on the couch watching Johnny Carson.  I figured it was starting to look strange, so I turned out the light and joined my mom on the couch again while Lorraine fell asleep in the corner of the bathroom.

Finally, the dryer stopped and all laundry was completed!

“Okay…”   We sat for another minute.  Then she picked up her purse and shook it, making the change in it jingle.  She peered inside it, then poured all the change onto the couch.

“What are you doing?” Now I was getting irked.

“I’m just curious how much money I have in pennies…” and then she started stacking them.  Slowly.  It was torture.  I couldn’t take it, so I went back into the bathroom and stayed, hoping my absence would encourage her to go to bed.  15 minutes later she finally said goodnight.

When I asked her about this a decade later, she said she knew Lorraine was in the bathroom.  She assumed the curling iron and panties she discovered in my room were not mine since I also had a secret stash of nudie magazines.  “You were about to move out, so why not have some fun?”

It’s discoveries like this that made me appreciate how an 18 year old girl, having her first child during the clash between 50’s sexism and 60’s feminism, created her own approach to parenting through trial and error, but always using discipline, humor and honesty.  In fact, humor and honesty would be the two qualities that shine brightest in retrospect.  She always talked to us like little adults.  Partly because she was encouraging critical thinking and partly because we were living out Helen Reddy’s “You and Me Against The World.”

My mother also used her own stumbling blocks as object lessons and inspiration for my sister and me.  One day, after a particularly awful time at work, she sat us down and said that if we wished to avoid the crappy jobs she had worked we needed to find something we loved doing and work towards it.

That was the day that I said, without a doubt, that I wanted to be an actor.  And that was the day she told me to open up the yellow pages, find a class, then figure out which bus to take to get to it.  If we wanted it, we had to make it happen.  Her support of my dream never wavered.

At 18, I was sputtering.  I had lost my waiter job in San Francisco and was living on a couch at a friend’s place, surviving on a bag of mixed nuts and an occasional free beer.  I swallowed my pride and called my mom.  She told me to come visit her and we would figure it out together.  Over that weekend, she helped me determine where I wanted to go (Los Angeles) and what I was going to do (work two jobs, save, then visit LA and find a school).  Six months later I was living in LA and enrolled at school.  Our plan worked.

Then she turned her wishes for her children onto herself.  She went back to school and got her degree, expanded her artwork, discovered her talent for writing and crystalized her own calling.

23 years later I got the chance to thank her for encouraging my dream when she let me adapt her short story, The Crooked Eye, into a short film with Academy Award winner Linda Hunt narrating her words.

Of course, if you asked my mom what her parenting philosophy was, she’d probably laugh loudly and say “try not to screw them up!”

We didn’t want to watch the rodeo without our mom, but we didn’t have a choice. As she pulled the $20 bill from her purse, the craggy-faced lady from the ticket booth came over to us.

“Don’t think twice about it, honey, y’all go on inside” she said in her low, smoker’s voice, “It’s Mother’s Day, after all.” 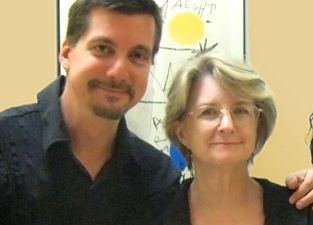