Today I turned into a twelve year old girl. My face went flush, my heart went all a pitter-patter and butterflies erupted in my empty stomach. Well, to be honest, I had two “lemon merengue” martinis sloshing around in there, but they weren’t the source of my exhilarated state. It was Tim Curry.

Now, this is an odd experience for an L.A. actor of 25 years to have. I have met Oscar winners, Emmy winners, and even Tony winners and always kept my fecal matter together:

I talked to Vincent Price about his work on Alice Cooper’s “Welcome To My Nightmare” album while standing in a post office.

I acted opposite Dick Van Dyke for a week (whom I considered my television babysitter back in the early 70’s).

I’ve worked with Martin Landau, Joe Don Baker, Linda Hunt, James Caan and others. Though I was excited to be in their presence, I didn’t lose my ability to be an adult well versed in the art of conversation.

So why Tim Curry? … Are you kidding me?!

Sorry…  Okay, like most people, I discovered him in The Rocky Horror Picture Show (I was twelve).  The timing of seeing the film coincided with my puberty.  A potent mix to create indelible impressions.  If I were a transvestite, perhaps I would’ve gone down the Eddie Izzard road.  But his Frank-n-Furter performance represented “freedom of identity” to me.  I went back 50 or so more times.  (And lost my virginity to a girl who played Magenta in the local floor show.  It was a really good movie.)

Oh, and the soundtrack was quite fun to perform ad naseum in my room.  Now, in addition to Jesus Christ Superstar, I had The Rocky Horror Picture Show.  In any given week I would be Jesus, Brad, Judas, Frank-n-Furter or Pontius Pilate.

Quick flash forward: Of all the roles in “Jesus Christ Superstar” (JCS), I loved the snarky drama of Pilate and his character arc within the “Trial Before Pilate.” About ten years ago I was asked to take part in the reading of a screenplay.  One of the other actors in the reading was Barry Dennen – the original Pilate on Broadway and in the film of JCS!  That was the first time I ever really got wobbly-nervous.  (I blurted, “I used to act out your part in my bedroom when I was a teenager!”  He quipped back, “I would’ve loved to have seen that!”)

Barry Dennen and Tim Curry were my first acting heroes.  Not Pacino or Brando.  The Christ killer and the Drag Queen!

Back to my pimple years: I began obsessing on all things Tim Curry, from “Three Men In A Boat” to his music. He had put out two albums (now four to date, plus a “best of“).  Read My Lips was moody and experimental.  Fearless was more mainstream, but still excellent.  Some of the best acting exercises for me were emoting through those songs on that huge imaginary stage in my bedroom (and to much acclaim from my imaginary audience.)

[“Sloe Gin” was a particularly excellent song for a 13 year old angst-ridden actor.]

For the first time, I was actually following an actor’s career, not just reading about the “Golden Age” stars who were dead or dying off. I was invested in the works of a character actor. And Tim Curry was and is an excellent one.  Just watch him in “Clue” (wished I had seen him in “Spamalot”).

I eventually added other acting heroes to my mental “follow list,” like Gary Oldman, Tim Roth, Daniel Day Lewis and others — but Tim Curry sat on a special shelf in my soul, next to Pink Floyd, JD Salinger, psychedelics and Bewitched.

When I first arrived in L.A. I often thought I might get lucky enough to meet him on the set or coming out of a voiceover session.  But in 25 years, it never happened…

Tonight, while I was tipsy and looking a little shlumpy, Tim Curry walked into the Hollywood Arclight Cafe to join friends before attending a special screening of White Irish Drinkers.  I was astonished by how quickly I descended into giddiness.  Giddiness and a little frustration.  Frustration because, dammit, I knew I was gonna have to actually meet him – even looking like a bum and with two martinis on an empty stomach.  I’d never forgive myself if I let him be.

Touching his arm, I said, “I’m sorry to do this to you, but-”  He jumped in immediately with, “Oh, please keep doing it.”   Any trepidation I had about being a nuisance to him quickly evaporated.  He was gracious and open.

More witty and interesting things were said, but my head filled with the white noise sound of a high blood pressure spike and the only thought I could track down was a repeating loop of “I’m talking to Tim Curry.”

Then he had to go.

We quickly grabbed a picture with a crappy cell phone camera, and he was gone. 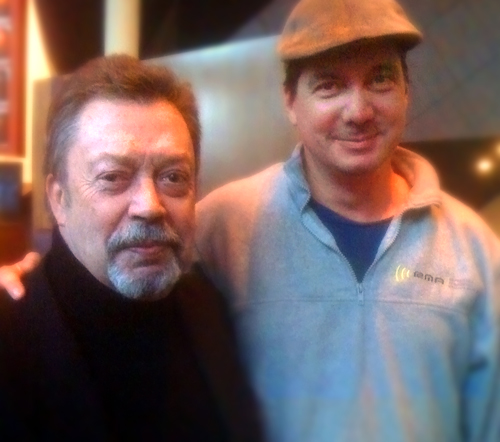 I fell back into the booth, convinced I probably came off like an imbecile, but truly ecstatic to have met my personal acting hero.

I know what I’ve just described is actually a very common story, minus the who and where (and martinis).  I’m just surprised (and happy) I had that kinda of star-struck awe still inside me.

in 1979, an actor sang from the screen in my local movie theater, “Don’t dream it, be it.”  32 years later, while living the life I had dreamed of as a kid, I got to meet that same actor.  How cool is that?

Looks like Tim Curry will be a guest on the secret cartoon I’m on!  Actually get to work with the man – finally!!!