In 2002 I started my first website – DCDouglas.com – to allow people online to hire me for home studio voiceover gigs. Back then, landing on the first page of Google was ridiculously easy for me! In those first 4 years I built up a lovely client list and am still working with most of them today.

But Google got snooty and persnickety. And I got distracted by my film and television career. My website stopped receiving that SEO love it so needed. 14 years later I realized I needed some help… From you guys.

If we have worked together and you enjoyed my voiceover service, would you be kind enough to do one or more of these things?

Link to this website (if you think my service would be helpful to your visitors)?

Review me on Google?

Review me on Yelp?

Any one of these things would be a great way to caress, nuzzle and grope my website SEO.

I know this is all rather unsexy for your Hollywood voiceover guy to ask this of you, but actors are just business people with a slowly deteriorating product that needs money for botox and appletinis. I think you feel me. I know my website feels you…

Now, for those of you who’d like to get a sense of my website journey, read these older posts:

We’re not in a recession anymore, Dorothy.  (Yes, I call myself Dorothy when no one is around.  No, I don’t have the shoes. Yet.)  The tax twister of April has disappeared and little career-munchkins have started gathering ’round!

So what’s a blogger with no exciting stories to do?

Not exciting, you say?  Puhleeze!  (Cue dreamy effect and harp.)

When I was a kid in 4th grade I was obsessed with space travel.  Partly because I wanted to escape the cruel world of the playground, but mainly because I was born with the Y chromosome.  I loved it so much (as much as I hated school) that I spent an entire day drawing a sophisticated spaceship dashboard in exquisite detail on my desk.  It had knobs, levers, a video monitor and weapons control (strategically placed for maximum damage to classmates).

Once my teacher discovered this (and specifically what the “Lasers By Desk Row” buttons did), it triggered a very concerned teacher-principal conference during which he made the argument for quashing my internal fantasy life in favor of being fully present at school to enjoy the cruel nature of my fellow classmates.

Decades later, I got back to that fantasy life.  No, the personal spaceship didn’t come through (I blame Carter and Reagan), but designing a voiceover website is very close to building a spaceship dashboard for a non-NASA employee/non-Richard Branson type.

Here’s a look at my first attempt where I walked the line between “just the facts” and self-pimpery blingdom: 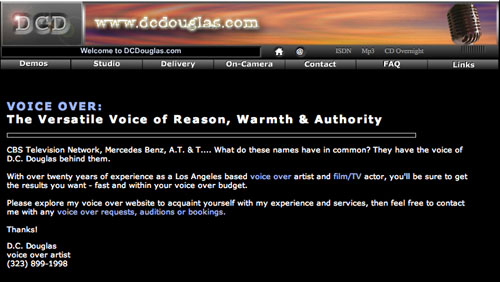 Not very exciting now, but I thought it was the bomb then… Both that term and my site went out of fashion fast.  Through a few permutations, it ended up looking pretty slick, but always with that Buck Rogers spaceship dashboard feel. (The button in the lower left zaps mean people.) 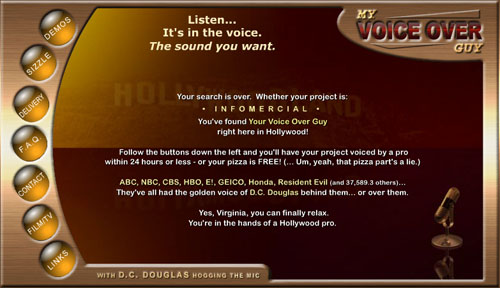 But all that has come to an end, my little babooshka.  Time for my website to grow-up, shave and put on a clean shirt.  Become respectable.

Over the last month, My Voiceover Guy has been redesigned for your cyber pleasure.   But what about the acting site, you ask?  Surely a bad-ass OCD boy from the cyber-hood couldn’t leave that sucka alone?  You’re right, Holmes.  I had to make it dope, as well.  … Okay, now my hip slang bag is empty.

The acting site has also grown from its 2004 version, where mousing over my image revealed a “money shot.” 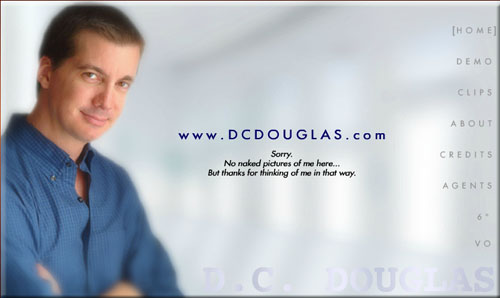 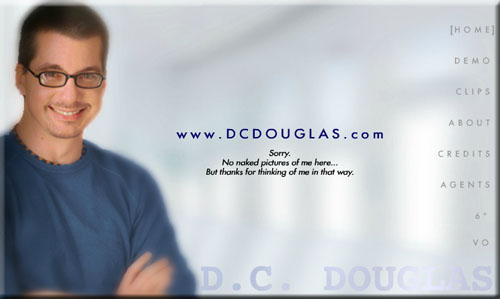 A round of Lasik surgery later, my white-Erkel pose went into the digital dump.  Now, thanks to YouTube being my video server, both sites are more of a fun, point and laugh-at-DC media-rich experience!

Now he believes in evolution, global warming, gay marriage, and separation of church and state.  In addition, he’s now just one website: DCDouglas.com.

Is It OCD or Just Me?

This is not the first time I’ve redesigned my websites.  (Read the history in all it’s glorious banality here.) But it is a kind of coming home.

Anyway,  a few years went by and my acting career was doing better and I knew google liked keywords in the url.  The birth of My Voiceover Guy!  And it worked for several years as I was on the first page of Google for “voice over.”

Then Google kicked me in the balls.  Changed the game.  Buried me on page 8.  Screw you, Google!  Here’s your toothbrush, now give me back my black t-shirt.

So I merged, dude!  My voice and face are back together again!  All on one self-horn-tooting website!  www.DCDouglas.com! (This blog, as well!)

The upside? Now voiceover clients will also know that I’m a film/TV actor instead of being perplexed when I tell them I’m “on set” and can’t record their project that day.  Random strangers can now fully comprehend the extent of my trolling for work.

The downside?  I lost all the “likes,” “stumbles,” and “tweet” stats for every blog post of mine.  I also have to notify 5268 websites to change their links from www.myvoice overguy.com to www.dcdouglas.com!  Well, at least the big, sexy high page-ranked ones.

How You Can Help!

Won’t you?  Aw, you’re sweet!  I just need to jumpstart this site again – to regain some visibility on the internet. So…

2. If you already link to me, would you mind changing it to point to https://www.DCDouglas.com?

3. If you’re a past client of mine and you don’t see a video of work we did together on my website (check out the voice over channels here), send me a link to the video so I can download and include it?  I’ll be happy to include your info and link!

If, in your travels, you find something broken, feel free to drop me a line.

So now, run off and explore me!  (Our safe word is “uncle,” just in case it gets too weird.) Thanks, kids!

Well, after 2 years this company’s support department became so slow and unresponsive that I had to pay a little more to move over to the amazing WPEngine – which I absolutely LOVE. Today. Fingers crossed.

I, obviously, no longer recommend Unixy. I assume they’ll remove my testimonial from their website…