Albert Wesker Died For My Career

Today Resident Evil 5 will be re-released for PlayStation 4 and Xbox One (online, the disc is July 12) – potentially bringing in even more fans to this crazy franchise! I thought it appropriate to bring back this 2009 post in honor of the occasion. (Back in the days when I tried to not let my depravity show online… pfft!) Enjoy!

“Yea, though I walk through the valley… and parts of West Hollywood and Beverly Hills, I will fear no casting director, for my work as Albert Wesker precedes me, and thy fans and conventions comfort me.”

And when, exactly, did I sell my soul to this religion?  In the year of our Wesker 2006.  I was asked to audition for a video game called “Umbrella Chronicles” over at Cup Of Tea Productions in Burbank, run by two great ladies – Danni Hunt and Lainie Bushey.  I hadn’t heard of the game… Actually, to be honest, I’m a workaholic and haven’t heard of many video games at all.  Only the ones I audition for or get hired to work on.  (I didn’t take my first vacation until 10 years after I moved to Los Angeles!)

I auditioned for several characters.  One, in particular, required a voice match.  They played the voice of Peter Jessop doing Albert Wesker. They said Peter was unavailable as he had several other gigs lined up, which makes sense.  In addition to being one of the good guys in this biz, he’s also a very talented and sought-after VO guy.

The voice Peter created is near impossible to recreate as it’s so unique in accent and intonation.  I gave it a whirl and then completely forgot about the audition.

Wesker On The Mount

About 3 months later, I got a call to come do the sessions – still having no idea how huge this character was.  I went in and worked with the lovely and accomplished Mary Elizabeth McGlynn.  I have to give her props for these sessions.  Voice directing a video game with producers from another country is a big challenge.  Not only is there a language barrier, but there is the abscence of a cultural shorthand.  When we thought I had nailed the voice, the direction would be translated and relayed back to us that it needed to be more this or that, etc.  The final result is a bit of a mish-mosh.  No worries.  It was a job.  I got paid.  They were happy.  The world continued to turn (as well as some fans, I heard!) 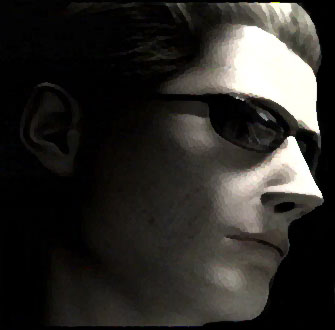 About a year later, my agent calls to tell me I booked “Resident Evil 5” as Albert Wesker.  I thought it was strange the character would appear in a different game.  I mentioned this to a friend.  He was a fan and, needless to say, he schooled my ass lickety-split (always wanted to put “ass” and “lickety-split” in the same sentence).  I went on the internet and realized I had landed into the middle of a huge franchise with hundreds of thousands of zombie-killing fans… Yeah, I felt a little pressure!

Then the producers cranked it up by asking me to audition for the physical motion capture part of Wesker.  You know, where he walks slowly with a gun and looks über-bad-ass?  I was excited to experience that aspect of video game production.  But I had also thrown my back out four days before while renovating my new house!  So my audition consisted of me walking around, not looking that bad-ass, but more broke-ass…  Hmm, that phrase seems wrong.  In the end, they hired Ken Lally (an actor and stunt man) to be the physical mo-cap guy.

[Side note:  In response to the emails, “No,” Ken didn’t do any of the Albert’s voice in the final production.  That was all me.]

The first recording session of RE5 started off a bit scary.  They played what I had recorded previously, but also what popular Canadian VGA, Richard Waugh, had done previously (not Peter Jessop)!  I thought, “Uh-oh…, Me no study his voice!”   They said they wanted to merge the two, but then to evolve the voice.  “Thank Wesker!”  I was all for evolving it. (I prefer to create, not impersonate… Oooo, I’m a poet!)

[Another side note:  Albert Wesker has been voiced by four actors over the last 13 years, Peter, Richard, myself, and the original; Sergio Jones.]

Of course, what made the process so much more complicated and fun this time was that I was also mo-capping the facial expressions.  That was a first for me.  Stand perfectly still and emote facially, but larger than life — and keep the subtle voice acting going – “Oh!  And don’t gesture!” Oy vey… Telling a voice actor not to gesture while performing is like asking a chef to cook without utensils… Like asking Jude Law to wear a condom before sex… Like asking Sarah Palin to think before she speaks! … Like… Oh, never mind.

Working with Reuben Langdon, Capcom, and director Liam O’Brien was a real pleasure, though.  I recorded over an 8 month period, I think.  I really enjoyed the humor and talent that everyone brought to the experience. 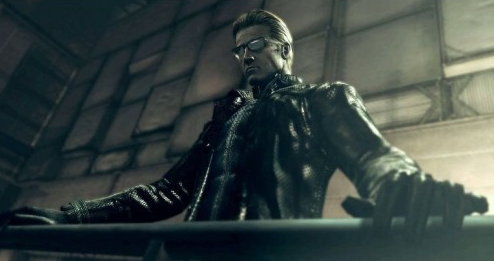 This time around, I was excited for the launch.  It didn’t hit me until after “Resident Evil 5” actually came out that Albert – sweet, cold, evil Albert – was dead.  No more franchise for me, baby… Of course, had he not died, they might have used a different voice actor in the future.  I’ve been at this long enough to know that’s the biz – money, logistics, time, and then talent…  But it was still a little bittersweet that he took that lava plunge and ate missiles. (If you haven’t played it, yet, I’m making that up.)

The upside is that it has elevated my voiceover profile for other video games.  Most notably, I landed a major new character in [redacted] –  a completely different genre, but one helluva game (2010 release)!  This game also features some great actors from a certain awesome Sci Fi television show…  (Oh, how I taunt and tease…)

Another upside; I’ve received requests for personal appearances at conventions around the world.  Some of which I might actually go to.  More on that at a later date (I’m looking at you, Ohio…).  That’s something my film and television career hasn’t done for me… (Though, oddly enough, “The Bold And The Beautiful” called today about a gathering of fans… Something about me and a horse… Yes, more on that later, too!)

The Resurrection Of Wesker?

Lest you gamers think I take it all for granted, let me be clear: I truly know how important Albert Wesker was to my voiceover life.   In fact, every night, I recite this prayer;

Now I lay me down to sleep,
I pray to Wesker my soul to keep;
When in the morning light I wake,
Please don’t kill me.

Need more Albert Wesker stuff? I got ya covered:

My abs are a bit better than these, but protected by a layer of state-of-the-art fat.