I know, I know, I just put out a blog post!  Don’t worry, I’m not becoming a navel-lint-picking blogger.  Just had to clear something up.

Some of you may know that a twitter follower of mine, Nathan Narain, started an online petition asking “The Walking Dead” (Bialy/Thomas Casting and executive producer, Glen Mazzara) to cast me, the voice actor of Albert Wesker (a villain from another zombie universe) in a guest spot on their hit show.  I was quite tickled by it.  And it’s a little ego boost.  My ego is short, so boosts are welcome.

Even though television producers rarely respond to these kinds of petitions (unless it gets into crazy numbers of signatures) I loved the fact that the petition was on Change.org.   After someone signs it they’re presented with three more important issues to sign.  A great way to broaden a gamer’s world view.  So, I had TSG shoot out a press release to help Nathan attain his 1000 signatures.

But it started to peter out around 400, after all, there were only just six very active twitter followers promoting it (six very cool cats) and only so many Wesker/DC Douglas/Walking Dead combo fans.  So, in order to goose it more (see how my OCD takes over?) I agreed to do a meet ‘n’ greet with 10 of them in LA during E3, the annual video game conference and show at the Los Angeles Convention center, if they could get the 1000 signatures.

I asked Genaro R. Avila to coordinate it and recruit up to 10 people to help him get the signatures. This led to some very sweet and ardent fans working that there twitter machine!

And it also led to a huge ball of guilt in my stomach.

Here were some very funny, fun and energetic young people trying to motivate friends and strangers to sign a petition just to get a middling LA actor another job. While I love to work (and would LOVE to be on “The Walking Dead”) and I do have a healthy (gluttonous) ego, I couldn’t help but feel this was a misuse of their twitter love.  The end goal is just to help one already happy and healthy dude?

So, I want to rectify that. I’m going to get unhealthy and miserable.  Wait, no, scratch that.

I will donate a dollar per signature (up to $1000) to charity. The charity will be chosen from 5 possibilities by fans on my Facebook page (voting survey to be posted on my page by the end of May).

The five charities they’ll choose from are:

So, won’t you help me put my ego in place, raise funds for charity, and get Nathan’s petition fulfilled?

Here’s how you can help:

1. Sign the “DC Douglas/Albert Wesker on The Walking Dead” petition.

2. Tweet out the link (http://www.change.org/petitions/d-c-douglas-on-the-walking-dead) with hashtags – #Wesker #RE6 #RE5 #Resident Evil #TWE #TheWalkingDead #WalkingDead #Zombies4Charity (I like this one), etc.

4. Email out the link to friends.

5. Start threads in forums about the petition (include link).  Such as “Resident Evil,” “Mass Effect,” “The Walking Dead,” and zombie forums.

7. Join relevant podcasts and talk about it.

8. Rent a blimp!  Let’s completely saturate the globe!!! … Sorry, had a Wesker-spasm.

Also include the footnote that for every signature D.C. will donate a dollar to charity (up to $1000).  I know it’s not a lot, but Big Daddy has a mortgage!

There it is!  With my guilt assuaged, I proudly command Albert Wesker fans (and Legion & Chase fans) to spread the word!

We’ve added a video to the mix and voting is open on the charities!

Voting is closed!  Looks like I’ll be donating $200 to each charity on June 7th at undisclosed restaurant in Downtown Los ANgeles with 10 twitter followers! 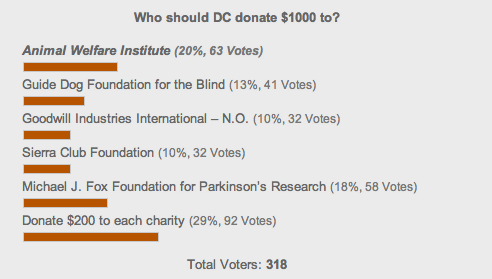