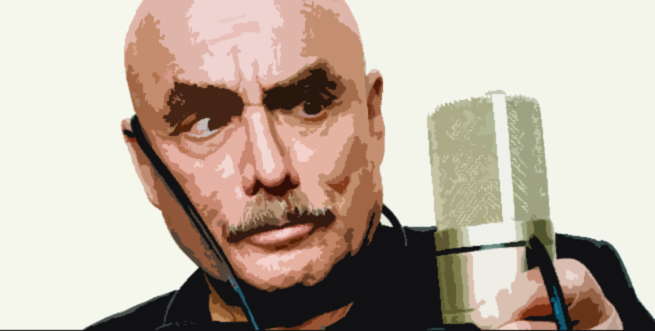 In A World, One Man – Don LaFontaine…

The ad man started a revolution in a niche commercial market, but the artist propelled “voice over” into the “rock star” stratosphere.

Tonight I went to a Garden Party Fundraiser for the Don LaFontaine Voiceover Lab (to be housed in the Screen Actors Guild Center).  It was hosted and partly sponsored by Joe Cipriano, a very well-known promo guy here in L.A. (and who has earned my good-natured envy).

Now, the strange thing about this event is that aside from the 15 people that everyone knows in the VO world (you know, the ones who cough up gold bullion and own estates in wildfire zones), most voiceover folks don’t know what other voiceover folks look like!  See, around eight years ago, recording from your home studio started to become acceptable at many agencies. (I was lucky in that I could blame on-camera work and auditions, so they had to let me record from home).  So, no longer do we see each other on a daily basis.  I like the pragmatic aspect of it, but I miss the socializing (surely I’m becoming a little like Ted Kaczynski around the edges!). 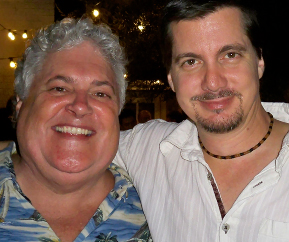 Here we all are, drinks in hand and significant others braving potential “industry party” boredom (bless you Robin).  Of course, all for a good cause.  The Don LaFontaine Voiceover Lab will give many newcomers a chance to learn, explore and grow. A voiceover learning center that I wish had existed when I rolled into L.A. 25 years ago (though there were many dubious “classes” available if one had the cash).  But still, it’s a little awkward.  For myself and my lady, we were rescued by the young, ingratiating Joshua Swanson.  (That man knows how to work a party!)  He recognized me from my website and we began a fun conversation about web design, “gear heads” and his wife’s charity work.  From there, he introduced us to Pat Duke and his lovely wife Sally.  Pat has amazing pipes and a wonderfully open personality. 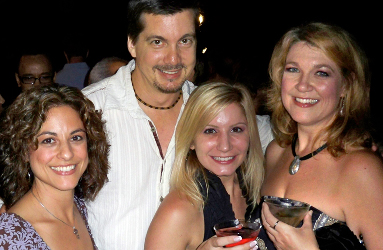 from the left; Robin Daléa, me (looking a little like a perv), Carin Baker and Rebecca Hargrove! (photo by VO Pro Zurek)

After a few drinks and the ice broken, I wandered a bit and ran into Rebecca Hargrove and Carin Baker.  Carin works over at Voicecaster in Burbank (one of the best places to cast a spot or to take classes) and it was a fun surprise to see her.  She’s a funny, down to earth lady who is also a voiceover artist with a sexy, smokey sound.  But seeing Rebecca was a flashback extraordinaire!  She used to be the booth director at my old agency (Abrams Artists and Associates) four years ago.  She’s now with William Morris Endeavor Entertainment and also coaches on the side.  A great director and lady — and always has a smile and a laugh at the ready.  It was truly heartwarming to see her. 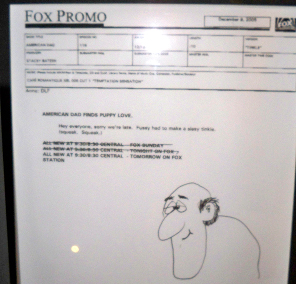 They had a silent auction featuring, among other things, framed scripts for promos Don had done.  What made them unique was that he doodled on them. Very good doodles!  I picked one where the bids weren’t so high and the doodle was rather simple.  I was drawn to it primarily because Don had crossed out the lines as he went (gives you a feeling that the session is moving faster than it really may be moving!)  It just felt like a real workman’s piece of copy – and it’s all for the benefit of the Voiceover Lab!

Joe had a few stories about how Don mentored several guys who now reside at the top of the field.  I wish I could say I was one of the guys that Don took under his wing and helped too, but I never met the man.  I only ever knew of the legend.  The closest I got to meeting him was by being the tag announcer on one of my GEICO spots that he was cast in. Indeed, I was honored to be in digital proximity to him.

It was a fun and classy affair put on by Joe and his wife at their lovely home in Bel Air. (And his studio, designed by George Whittam, will make your mouth water!)  As of tonight, they are more than 2/3 on their way to making this dream come true.

But regardless of the success of the Don LaFontaine Voiceover Lab, Don will forever be etched into the cultural landscape as The Voice, The Voice Of God, and That Guy Who Does All The Movie Trailers.  Not only for all the work he did, but for all of us who will try our damnedest to sound similar to him for many years to come.