He had a plan. He would take his GED and get the hell out of high school. Then, off to Juilliard. Followed by an amazing career on Broadway. So amazing that Hollywood would beg him to go to LA and star in a sitcom. That sitcom would become such a hit that movie offers would pour in. He would become a movie star. Then an Oscar. And then live life at one of his four homes in New York, L.A., San Francisco or Paris.

Then he saw that Juilliard had a GPA requirement. Okay, scratch that. Instead, he would go to the Royal Academy of Dramatic Art.

At 17, he hopped on his first solo plane ride to New York. Stayed alone for the first time in the Westin Hotel. Auditioned for RADA alongside twenty-something hopefuls. Bought microdot LSD in Central Park. Tripped his brains out on the flight home while sitting next to a cute Jewish girl and her mother who kept trying to engage him in normal conversation while he was getting lost in the designs of the seat fabric in front of him.

He did not get accepted into RADA.

New plan! He would go to Los Angeles directly. Skip the theatre stuff and go for the money and fame.

But first he would spend a year in San Francisco working as a waiter at the Original Joe’s in the Marina and dropping LSD with his friends every weekend. He got a little sidetracked.

Eventually he found his way to LA with $700 in his pocket, thanks to his mother. He got a room in the back of the Vangerpens’ house in Korea Town. Got a job selling Strip-A-Grams on the phone. And he hatched a new plan.

He decided that he would become a late night DJ, do voiceovers in the morning and be a film or TV actor during the day. He would have it ALL! First stop? Get some DJ advice and experience. So he went down to the local radical public radio station – KPFK.

He was placed under the kind guidance of Jon Cavanaugh-Spain (aka Crash Cavanaugh). Jon volunteered his time as the engineer of FolkScene, hosted by the gentle and warm Howard and Roz Larman. His daytime job was working for NBC News and The Tonight Show. 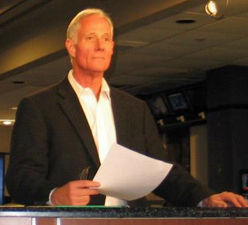 It was Jon who took him out for a free meal after their first meeting. When the young actor demurred at the idea of Jon buying his meal, Jon shared a life lesson he had learned from a hippy 20 years earlier, “Never refuse a free meal, man.”

It was Jon who also helped him put together his very first voiceover demo – edited in the NBC recording studio. And it was Jon who gave him his first radio play experience, recording some comedy bits for the Planet X News Service and KCRW. This led to a PSA for the Great Peace March for Global Nuclear Disarmament.

Meanwhile, back at KPFK and his DJ dream, Jon showed him how to operate the antiquated board and segue between the reel-to-reel songs and the live broadcast from the booth with Roz and Howard. Eventually, He would substitute for Jon. Roz and Howard knew he was an actor and let him throw in odd “Twilight Zone” intros at the top of the show. They were kind and generous. Even when the engineering resulted in a minute of dead air (and the young actor was at a loss with how to handle it) Howard hid his anger and was gentle in his critique.

Eventually the young actor scratched DJ from the plan. Now it would just be voiceover and acting.

25 years later, Jon “Crash” Cavanaugh-Spain reached out to the now middle-aged actor to let him know his bit from all those years ago would be played on internet radio. Here it is, a very young D.C. Douglas:

Sometimes you need a break to find out what you don’t want to do with your life. Because of Jon Cavanaugh-Spain, I got both kinds of breaks. A glimpse into both radio and voiceover. The end of a DJ fancy and the beginning of a voiceover career. Thanks, Jon.