It’s Official: I Am A Transformers Rescue Bot!

There is one thing I enjoy almost as much as landing a gig and that’s having the NDA (Non Disclosure Agreement) lifted!  Yup.  I’m a self-pimping, Google-lusting, Dear-God-where-is-my-next-job-coming-from-must-promote-ad-nauseum Los Angeles actor. And now I’m free to promote!

But this particular gig needs no hard sell.  It’s a Transformers gig, for crying out loud! (Can you sense my child-like giddiness?)  I am honored to be part of The Hub’s new cartoon series, “Transformers: Rescue Bots!”

From the creators of “Transformers Prime” comes an all-new animated series following a group of Autobots charged with a mission to protect and learn about humans. Stationed on an island off the Eastern seaboard by Optimus Prime, the “Transformers Rescue Bots” – Heatwave, Boulder, Blades and Chase – team with a human family of first responders including a police chief, firefighter, rescue pilot and engineer to maintain peace and safety in their new found home.

So, without further ado, let me introduce the wonderful actors I’ve been working with in secret over the last six months:

Most anime and videogame fans need no introduction to Steve, and “Transformer Prime” fans are now doubly excited.  Steve is known for a bevy of voices, including Spike Spiegel in “Cowboy Bebop, Wolverine in the TV series “X-Men” and “Wolverine,” Vincent Valentine in “Final Fantasy VII” and Starscream on “Transformers Prime.”

Quirky aside: I have been in several projects with Steve over the years and have never actually met him until “Transformers: Rescue Bots!”  We would see each other’s names on cast lists and schedules, but most of those projects recorded the talent alone.  In TRB™  (coining new acronym because I can), we record together, so it was a real pleasure to finally meet him. Now I just have to get him to come over on poker night — if I can’t have his career, at least I can try to take his money.

A wonderful thing about TRB™’s casting is that the producers have hired both veterans and up’n’comers.  Imari Williams is a voice you’ll be hearing a lot of for many years to come.  Though he has many commercial credits as well as some videogame ones, TRB™ marks his first lead in a cartoon.

As a person, he can be credited with starting hugs and group bonding amongst the cast.  An awesome voice and huge heart.

As a person, he is a speedball of silliness and cuddle-worthy kindness.  His improvisational instincts are a joy to witness during a recording session.

Never heard of him.

If you don’t know who this man is then “it must be inordinately taxing to be such a boob!”  Maurice is known for so many damn voices, but let’s just mention Morbo and Calculon on “Futurama,” Alec Baldwin on “Team America,” and The Brain on “Pinky & The Brain” — Yes, we should all bow down!  This is also why he won an Emmy for Outstanding Voiceover performance this year!  Also a sweetheart of a man.

Lacey is a child actor gone right…”Party of Five,” “Family Guy,” “The Wild Thornberrys,” “Lost in Space,” “Mean Girls,” “Ghosts of Girlfriends Past” … (Dear god, why wasn’t I born a beautiful, talented girl?) Lacey is one of the big names in our cast who is so down to earth I didn’t even realize she was the Lacey Chabert! She is as nice, kind and charming as she is in interviews, if not more so.  Youth, beauty and talent.  I think I’m cool just being around her.

Here is another child actor gone good. A veteran of both on-camera and voiceover who brings a following to the show.  Jason was the new Eddie Munster in “The Munsters Today,” Rich on “Step by Step,” Snapper Carr on “Justice League,” Haku in “Spirited Away.” His credits go on forever!  Aside from being a hugely talented and supportive actor, he is the first cast-mate to see me drink four apple martinis and not judge me.

I love this guy!  Shannon is a very talented newcomer to voiceover.  A guy with a truly signature voice.  Shannon’s roots are in improv and I would bet good money he will be on his own sitcom or sketch show in the next 10 years.  You’ll also get to see him onscreen in the upcoming “The Assignment” with Adam Baldwin and French Stewart.

To think this actor was born the year I officially became cynical about my career just boggles my mind.  Élan is a very talented 12 year old whose credits include Pippin Gamgee in “The Lord of the Rings: Aragorn’s Quest,” Pepe in “Handy Mandy,” and Ceviche in “Chowder.”  Watching this young pro work melts much of my cynicism away.

How many ways can I say ADORABLE?!  About as many as I can say TALENTED!  TRB™ is her first big milestone on her very long and successful career path.  I watched her with amazement during our table read.  Because of a little thing called “school” we tend to record at a different time than the kids.  It’s a shame, because watching young, natural talent in action really is inspirational.

“Roots.” “Star Trek: Next Generation.” ‘Nuff said.  When I walked into the room for our very first table read of the first episode and saw LeVar Burton sitting there, I immediately thought, “Wow, that guy looks a lot like LeVar Burton.  The confusion must really annoy him.”  We’ve been very lucky to perform with him and enjoy his humor, talent and warmth.  And like Jason, he doesn’t judge my sugar-martini obsession.

When you think of the top working voice actors, you think of Jeff Bennett.  His credits outnumber my insecurities, which means they go on forever!  Currently he is Azmuth on “Ben 10: Ultimate Alien” and Alfred Pennyworth in “Batman: Year One.”  But we all know him as the voice of Johnny Bravo!  I’ve only met him a few times and, to be honest (and true to my insecurities), I was a little intimidated to say much to him.  He, on the other hand, was easygoing and very nice.

The man, himself…  For a more in-depth and embarrassing look, read my Peter Cullen post.

… Yeah, what an AMAZING cast!  And I am dumbfounded that I landed in the middle of it without bribing or sleeping with anyone.

And how did that happen?  Because one of my favorite voice directors, Ginny McSwain, included me in on the auditions.  I know Ginny from working with her on “Mass Effect 2” and “Dragon Age II.”  Man, what a treat it is to work with her on a cartoon!  I thought she was phenomenal in her directing style in one-on-one sessions, but watching her with a large group of voice actors is an amazing sight to behold.

Though The Hub describes this as a show “created specifically for younger viewers,” I have to say (without breaking any NDA provisions) that the stories, writing, humor and action will be entertaining for both younger kids and adults!  This show is destined to have broad appeal.  And credit for that goes to Jeff Kline and his excellent creative team. 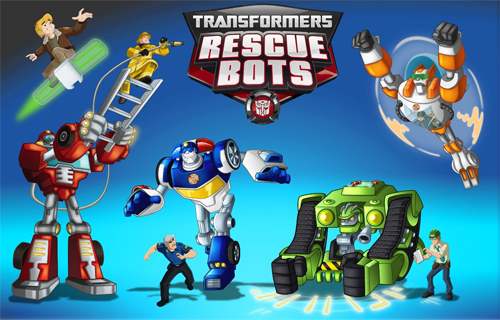