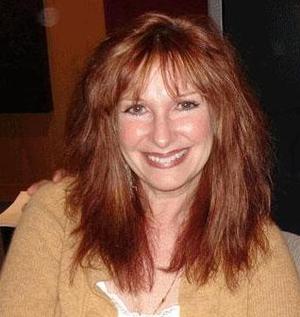 Okay, I’m not sure if I’m even allowed to say I’m in this video game sequel behemoth, but I love to live on the edge. I don’t recall signing an NDA… (UPDATE:  Apparently I did, so I must redact!)

I won’t reveal the character I play, but I will say he’s a major one and a breeze to voice. I went in today for my fourth recording session. The game is from [redacted] and the people have all been great, as well as the technicolor engineers and producers.

But the real joy has been working with voice director  Ginny McSwain.

I love this woman!  As a person, she’s kind, sassy, intelligent and funny as hell.  As a director, she’s the best in the business.  Concise, supportive, driven and über talented.  It is astonishing how voice directors in video games don’t get the full credit they deserve for the final product.  A good one can take a game to the next level.  [redacted] will rock for many reasons, one of the biggest will be the voice acting, thanks to Ginny.

I’m also privy to some of the casting and am just jazzed to be in the same game with some of these actors.  A few were in one of the best TV shows not watched by many… Mainly because it was thought to be a sci-fi show… But it was so much more.  Mythology, politics, onto- whoops!  Okay, now for sure the NDA police will find me.

It’s been a fun ride in the video game arena lately!  First, I reprised as the much loved/hated Albert Wesker in Resident Evil 5, then kicked literal ass in Tekken 6, and now getting to [redacted] in [redacted]!  And the irony of it all is that the last video game I played was pong!

…Okay, that’s a lie.  I debased myself with Grand Theft Auto a few years ago.