Welcome! You’re probably here for one of three reasons: ONE: I did that thing in that show you liked and you wondered how the hell you could stalk that character actor. TWO: You know me from voiceover and wanted to see my face (brave). THREE: You’re just looking for naked D.C. pictures (braver).
BAD NEWS: No naked pics (I need a better photographer).
GOOD NEWS: There are over 100 video clips of DC Douglas! If you’re not thoroughly sick of me by the end of your visit, you didn’t watch enough of them.
TIP: Explore DC’s career via ▶ playlists.
Comedy Demo Reel 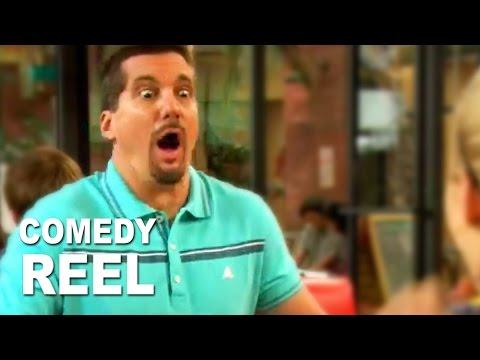 Supplemental information: I was born in Berkeley, California, but lived throughout the San Francisco Bay Area. My family history that included the circus, vaudeville and burlesque, so I fell into theatre at an early age.

After high school I moved to Hollywood to study under Estelle Harman. During the late 80s and early 90s I performed with various Los Angeles theatre repertory companies, including several years as a member of the critically acclaimed New One-Act Theatre Ensemble (Theatre of NOTE).

My first break came in 1996, when I was cast in a guest role on the NBC pilot Boston Common. Max Mutchnick and David Kohan sort of appreciated my "where's Waldo" look that they had me back for 10 more episodes as the conservative and humorless student "D.C." This led to a modest, yet steady stream of co-star and guest star work in television.

That all being said, to my chagrin, I remained a mostly anonymous character actor and voice over artist until 2008 when I was cast as the voice of Albert Wesker in Resident Evil 5 and Legion in Mass Effect 2. Adding to my sexy visibility were a series of non-acting events; my public battle with Tea Party PAC Freedomworks on cable news (poor GEICO was caught in the idiotic crosshairs), my subsequent viral videos (including "Why #OccupyWllStreet? 4 Reasons"), and, oddly, my being credited by The Hollywood Reporter with the tweet that began the Brett Ratner Academy Awards controversy.
In addition to my viral videos, I wrote, produced, directed and edited numerous film shorts. The Crooked Eye, starring the lovely Academy Award winner Linda Hunt, was released on iTunes.

I’m often asked at conventions who my acting idols are and I always have to sidestep the question. There are so many insanely talented actors out there - most of whom we will never get to see. But of the ones that have achieved success (a misleading concept in the entertainment business) I would start with my childhood and work my way up to the present.

Dick Van Dyke was the first actor who I wanted to have as a father as well as become when I grew up. Later, I became obsessed with Benny Hill and Tim Curry. Yes, I know that’s an odd juxtaposition.

In my early twenties I was introduced to Tim Roth and Gary Oldman. And from there the list gets voluminous!

As a film and television actor for 30 years in Hollywood, I have had some fun characters and gigs. Some include, Criminal Minds, NCIS, ER, NYPD Blue, 2 Broke Girls, Boston Common, Kickin' It, Dog with a Blog, SyFy's Isle of the Dead, Sharknado 2, and many more. Please be sure to check out the various video playlists here. There’s hours of entertainment to view!
DC DOUGLAS MENU:
×
MENU